THE “FAIRLIE” LOCOMOTIVE USED ON THE BOLIVIAN NARROW GAUGE RAILWAYS

FROM time to time ingenious efforts have been made to depart from what may be described as the orthodox in locomotive design. Such ingenuity has been prompted by the desire to obtain an engine which will meet peculiar prevailing conditions more efficiently than the familiar type of locomotive.

This quest is by no means of recent date. The necessity of some such development was realised in the days when railways were young. The engineers of motive power found it difficult to secure economical working upon the roads with their sharp curves and heavy banks laid by the early railway builders. The fact that the cheapest and easiest extrication from the quandary was to rebuild the lines was not recognised at that time; or, if it was, the treasuries were not sufficiently rich to sanction costly reconstruction, Accordingly the mechanical engineer was compelled to make the most of a bad bargain, and this situation stimulated his ingenuity to a marked degree.

The countries which were the greatest offenders in this respect were those of recent exploitation, or which were only beginning to attract commercial interests such as Australasia and the South American States. There the railway builders, hampered by scarcity of funds, reduced the cost of construction to the lowest possible level carrying their tracks over obstacles with long stretches of banks running up to 1 in 25, and writhing and twisting through favourable channels intersecting the mountains in an amazing manner, so that curves of 250 feet radius were more the rule than the exception. The builders scarcely gave a thought to the railway operator.

As the years rolled by, and the traffic over these lines became heavier, it grew more and more difficult to adapt the ordinary type of locomotive to the work with any pronounced degree of cheap working. In the attempt to surmount the difficulty many freakish designs were devised, but, needless to say, they only enjoyed a fleeting existence. They were ingenious, it is true, but being more novel than practical, they only helped to swell the inventor’s scrap-heap of hope.

Among these tireless experimenters was a Scottish engineer, Robert Francis Fairlie. He passed through the stern school of practical railway experience both in Ireland and India, finally relinquishing active operations in favour of a consulting engineer-ing practice in London. He attacked the problem, and his varied railway knowledge and the peculiar conditions governing the question gave him an advantage over his contemporaries, many of whom were amateur railway enthusiasts, possessed of merely a rudimentary knowledge of the subject or what was required.

In 1864 he introduced his solution of the problem, and the unusual design aroused considerable interest. It resembled two tank engines placed back to back with a common cab and boiler. Each moiety appeared to be complete, with its smoke-stack and driving wheels placed beneath the fore part of each boiler. The most conspicuous feature of the locomotive, however, was that each driving wheel unit, together with its cylinders, was carried upon a bogie truck. By this means flexibility was secured, since the upper part of the engine, comprising the boiler and fire-box, was pivoted at either end upon the bogie. This arrangement enabled increased adhesion to the rails to be obtained, as well as a more efficient distribution of

weight upon the axles, while at the same time the sharpest curves could be negotiated with ease. The engine, being double-ended, could be driven in either direction, so that turning round was obviated. The cab was placed centrally, only on each side of the boilers.

THE DOUBLE BOILER. FIRE-BOXES, AND FOUNDATION RING OF THE LARGE “FAIRLIE” ENGINE BUILT FOR THE MEXICAN RAILWAY

Despite its unusual appearance, the engine substantiated the claims of its inventor, and was adopted promptly in those hilly countries where curves and grades were adverse to the ordinary locomotive. It was introduced into New South Wales, New Zealand, the South American countries, Russia, Sweden - in fact, in all those districts where it offered a solution of a perplexing difficulty in railway operation.

The system, of course, possessed disadvantages. The mechanism was somewhat more complicated; trouble was exper-ienced in keeping the expansion and ball and socket joints, conveying the steam from the boiler to the cylinders and from the latter to the exhaust, tight; while in later models, of larger size, the variation of the water level in the boilers when the engine was working over steep banks was considerable. Many ingenious attempts to eliminate these shortcomings were made, but they only succeeded in emphasising the complications. Three engines of this class which were built some years ago by American firm for service in Central America were among the most complicated railway engines which ever have run over the steel highway.

Taken all round, however, the Fairlie engine meets the peculiar situation and purposes for which it has been designed very effectively. Now it may be seen working in all parts of the world where the country threaded is mountainous and where inclines are steep and curves are sharp. Up to the present no other type of engine has proved more suited to the work and as a result large and more powerful Fairlie engines have been built meet exigencies of traffic over the lines upon which they were introduced. In fact, in certain instances, so far, it has been the means of avoiding the costly process of re-aligning and reconstructing the pioneer roads.

A HEAVY POWERFUL “FAIRLIE” LOCOMOTIVE, BUILT FOR THE MEXICAN RAILWAY

It weighs 138 tons. The photograph shows the disposition of the driving wheels on two bogies and the driver’s position on the footplate. Comparison with the man gives an impressive idea of its large proportions.

The Mexican Railway has three of these engine which are among the most powerful and largest of their character that ever have been constructed. They we built at the Newton-le-Willows locomotive works of the Vulcan Foundry Limited, to handle trains of 300 tons over banks rising 1 in 25, with curves of 325 feet radius. This standard gauge railway possesses some of the stiffest stretches of road worked by adhesion that it is possible to find Central America.

The two boilers, each measuring 12 feet 11 inches in length by 5 feet outside diameter, and containing 216 steel tubes, are in one piece, though there are two separate fire-boxes, with water space between. A steam dome is placed upon one barrel, and provided with four “pop” safety valves. The total heating surface of the boilers is 2,924 square feet; the grate area is 47.75 square feet. A conspicuous feature is the large foundation ring for the two fire-boxes, which is made in one piece out of the solid and without weld.

Each bogie truck carries three pairs of driving wheels, 4 feet in diameter, the wheel base of the bogie being 9 feet 3 inches, while the total wheel base is 35 feet 6 inches. The four cylinders - two on each bogie - have a diameter of 19 inches and a stroke of 25 inches. Steam is used at a pressure of 185 pounds per square inch. The overall length of the locomotive is 56 feet 1¾ inches, while the total weight in running order is 138 tons - 69 tons to each engine. The whole of this weight, representing 28 tons per axle, is available for adhesion. 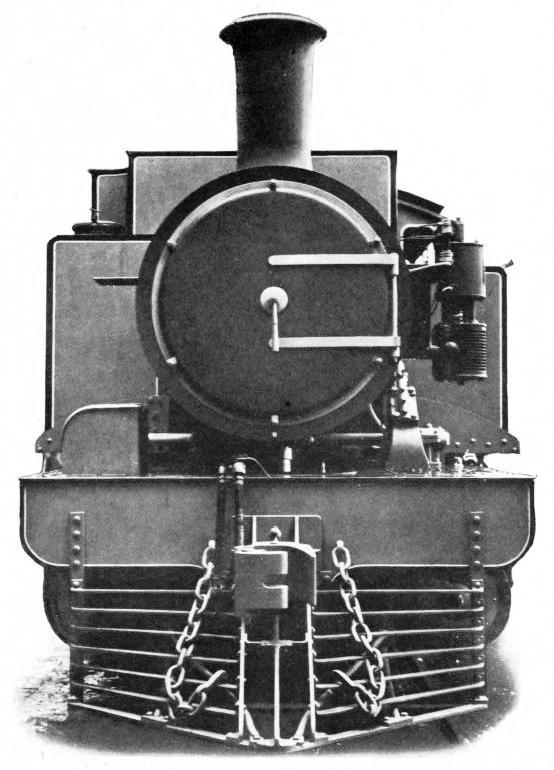 The valve-gear is of the Walschaert pattern, and the reversing gear has been designed specially to prevent the position of the valve

motion being affected by the engine when entering or leaving curves. The reversing wheel is operated by means of bevel gears, which move a horizontal shaft fixed on each bogie, together with a quadrant and worm gearing. There is a ball and socket joint at both ends to

ensure flexibility, and a slot and sleeve on

the diagonal shaft allows for the bogie’s move- ment. The motion is locked by means of an air cylinder operated by the Westinghouse air-brake apparatus.

Either coal or oil fuel may be used. The regulator and driving control are placed on the footplate on one side the fire-boxes, which extend through t centre of the cab, while firing is carried on from the opposite side. The arrangement certainly makes the cab some-what confined but in this case this drawback is not experienced to the same degree as in Fairlie locomotives built for narrow gauge lines. Either engine may be used independency of the other, two regulator handles, mounted one above the other and working horizontally in a toothed quadrant being placed on top of the boiler for the driver.

These engines have proved highly successful in Mexico and are performing excellent work. They are engaged in hauling trains weighing 840 tons over the stiffest banks and the sharpest curves, at a speed of 9 miles per hour.

On the Bolivian Railway

Another engine of this type, though differing in certain conspicuous features which emanated from the Sheffield works of the Yorkshire Engine Company, Limited, is working upon the 2 feet 6 inches gauge lines of the Bolivian Railways. Here the grade runs up to 1 in 30 while the curves are as sharp as 280 ft radius. These engines not only had to capable of handling heavy loads over such difficult portions of the system, but had to be capable of completing long runs well.

In this instance, instead of there being one double boiler, there are two separate boilers of the Belpaire pattern. This arrangement not only reduces the trouble experienced in connection with the variations of the water level within the boiler owing to the inclination of the engine but provides a roomier cab similar to that of the ordinary engine. The water tank, capable of carrying 1,500 gallons of water, are continued under the platform of the cab. The motor bogies, each with three coupled wheels of 2 feet 6 inches diameter have a rigid base of only 6 feet, the total wheel base being 29 feet 4½ inches. The centre pair of wheels on each bogie is flangeless, and each bogie carries two outside cylinders, having a diameter of 12½ inches by 16 inches stroke.

Owing to the narrowness of the gauge the centre of gravity is kept very low, the centre line of the boiler being only 4 feet 10½ inches above rail level. The boiler measures 9 feet 3¾ inches in length by 3 feet 5⅛ inches diameter, and contains 106 tubes, the total heating surface being 1,046.88 square feet, and the grate area 21.66 square feet.

In this engine the reversing shaft is carried along the tops of the tanks, the gears being coupled and operated with a screw and wheel action carried on a pillar in the centre of the footplate. The steam distribution also is carried out upon improved lines, with the object of overcoming the difficulty in keeping the pipes and joints steam-tight, which was one of the great objections to the earliest types of Fairlie locomotive. The sand boxes are placed on top of the boilers, just behind the smoke stacks, and the sand is led to the wheels of the bogies through flexible pipes. Each engine can be driven independ-ently of the other, a regulator handle of the general pattern being placed in the usual position in each part of the cab. The total weight of the engine in running order is 52.1 tons.

Although many efforts have been made to devise an engine superior to the Fairlie for the service in which this locomotive excels the broad principles laid down by the Scottish engineer half-a-century ago still appear to reign supreme. Modifications have been made in regard to the general details, but the fundamental principles have undergone scarcely any improvement. 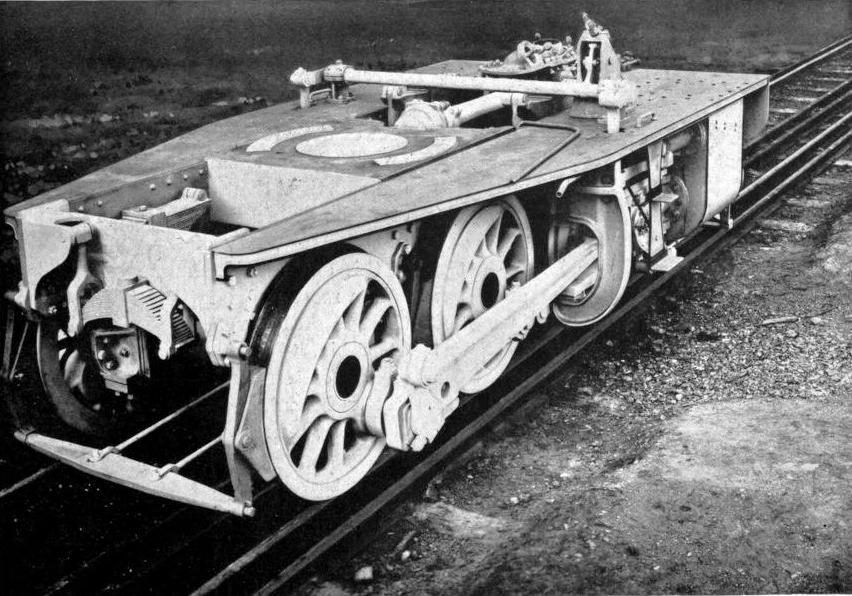 [From Part 8 of Railway Wonders of the World by Frederick A. Talbot, 1913]