IN order to cope with the steadily increasing weight of express passenger traffic on the Southern Railway, a new loco-motive, designed by Mr. R. E. L. Maunsell, Chief Mechanical Engineer for the Southern Railway, has been built at the Eastleigh, Hants, locomotive works. This engine is No. 850E, named “Lord Nelson”, and is the first of a new series of 4-6-0 four-cylinder simple superheater engines with double bogie tenders, slightly heavier and possessing more power than the famous “King Arthur” class. The new type will be known as the “Nelson” class.

The “Lord Nelson” has been built to haul trains of 500 tons at an average speed of 55 miles per hour, but since the heaviest passenger trains on the Southern Railway at present rarely exceed 450 tons, the locomotive will possess considerable reserve power.

Most of our readers will be aware that some, two years ago Mr. Maunsell conducted a number of experiments with one of the Drummond four-cylinder engines, No. 449. This engine had two inside and two outside cylinders, whose drive was divided between two axles, the angle of the cranks being arranged to give four impulses per revolution. In the experiments mentioned the drive was re-arranged to turn the cranks of the inside engine through 45° and the wheels were re-balanced to suit this arrangement, which resulted in eight separate impulses being given in each revolution.

The increase in power secured by this alteration was so remarkable that a similar order of cranks which, for reference purposes, can be termed the 135° arrangement, has been embodied in the “Lord Nelson”. In this case, while the crank pins on each of the two driving axles are placed at 90°, one pair is arranged 135° in advance of the second pair. Thus are the eight equally-spaced exhaust impulses secured. The remarkable effect of this arrangement upon the steaming power of the boiler has made it necessary to enlarge the blast nozzle in three successive steps. 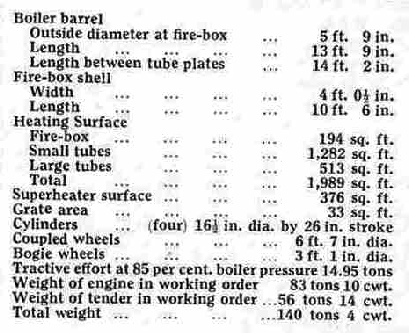 Walschaerts’ valve gear is employed for both inside and outside cylinders and the revolving and reciprocating parts have been made extremely light by the use of a special high-tensile steel known as “Vibrac”. This patent steel is manufactured by Sir W. G. Armstrong Whitworth & Co. Ltd, and is of the nickel-chromium class, its specially high quality being obtained by substituting molybdenum for a portion of the chromium. The comparative lightness of the balance weights used on the wheels is, of course, a resultant advantage, and the use of this special steel will be watched with considerable interest by all locomotive engineers.

The fire-box is of the Belpaire pattern - a new feature for engines built at Eastleigh - and is of extremely liberal proportions. The fire-box stays are of steel in the fire area and ordinary riveted copper in the other parts. The tubes are of moderate length, there being 173 small tubes each of 2-in external diameter, and 27 large tubes of 5¼-in external diameter. The superheater header is of the Maunsell type, with air relief valves, while safety valves of the Ross patent “pop” type are mounted above the fire-box. Included among the other fittings are a soot blower, exhaust injector, and a four-feed sight-feed lubricator with a separate condenser for the cylinders and valve chests.

The cab follows generally the design of Mr. Maunsell’s latest 4-4-0 type engine cabs and has side windows of glass and tip-up seats for he driver and fireman. All he controls are arranged so that they can be reached with a minimum of effort.

The double bogie tender is similar to that used with the “King Arthur” engines with the exception that it has straight flat sides with no overhanging coping. It has a capacity for 5,000 gallons of water and five tons of coal. The three steel cylinders that are just discernible in the illustrations at the rear of the tender are auxiliary reservoirs used in connection with the automatic vacuum brake and are specially connected to act on the tender wheels.

The overall dimensions of, the “Lord Nelson” permit of its being worked on any main line section of the Southern Railway, and the leading particulars are as shown in the accompanying table.

When it is recalled that the complete weight of the “King Arthur” class engine with tender is only 34 cwt less than that of the “Lord Nelson”, it will be seen that the considerable increase in power has been achieved only by close attention to detail. The tractive effort, 33,500 lb (14.96 tons), is calculated on the usual basis of 85 per cent, of the boiler pressure and is greater than that of either the GW “Castle” engines or the LNER Pacifics, the tractive efforts of which are 14.12 and 13.32 tons respectively. The “King Arthurs’’ on the Southern Railway have a tractive effort of 11.31 tons.

The “Lord Nelson” has already worked the Waterloo-Bournemouth and “Atlantic Coast” expresses and at present is being tried on the Eastern Section’s Continental service, being temporarily stationed at Nine Elms, where it has been fitted with a shelter for indicating purposes.

Side view of the new Southern Railway Locomotive No. 850, “Lord Nelson”.

Leaving Waterloo punctually at 11 a.m, the train consisted of twelve well-filled coaches, and made an excellent run into Salisbury, arriving 35 secs. ahead of schedule, after covering the distance of 83.8 miles in 89.25 secs. The fastest recorded speed was 82 m.p.h. attained at Andover, while the 75.4 miles between Wimbledon and Tunnel Junction were run in exactly 75 minutes. 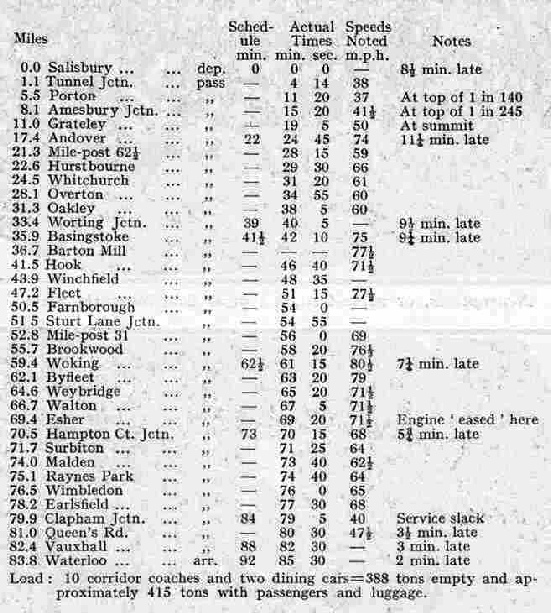 The return journey provided a greater test of the engine’s capabilities, however, for the start was made 8½ minutes after time and the run throughout was accompanied by a very steady drizzle of rain. Despite this, the train arrived at Waterloo only 2 mins. behind time, having covered the run in 85 mins. 30 secs. From Worting Junction to Esher, 36 miles, the average speed was 73.85 m.p.h, the speed falling below 70 m.p.h. only momentarily to 69 m.p.h. when passing the mile post 31 miles out from Waterloo; while from Grately to Earlsfield, 67 miles, the speed only once dropped below 60 m.p.h.

The details of this run are recorded in the table shown on this page.

The public interest in this great locomotive has been intense and at Waterloo it has been literally besieged by railway enthusiasts. Additional interest also is lent by the fact that the “Lord Nelson” is one of the few locomotives to have been driven by Royalty. The Duke and Duchess of York recently paid a visit to Ashford to fulfil certain engagements, including an inspection of the Southern Railway’s works. After visiting the various erection shops, the Duke and Duchess concluded their tour by mounting the footplate of the “Lord Nelson”, the Duke taking charge of the regulator and driving the engine from the works into Ashford station.

It is not intended to supersede the “King Arthur” Class and in fact further engines of this well-known type are to be constructed in the near future. 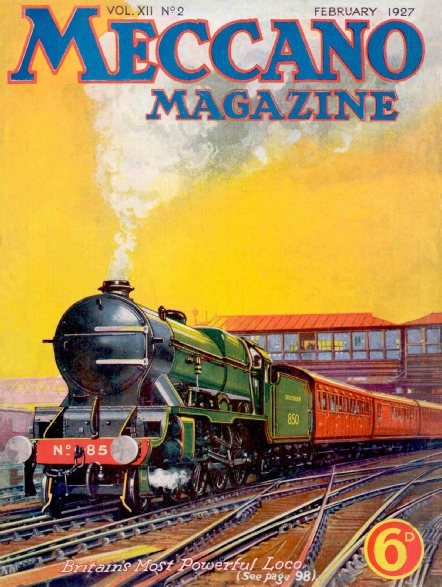 You can read more on “British Express Locomotives”, “The Golden Arrow” and “The Story of the Southern”, on this website.