THE IMPORTANT POSITION at Willesden Junction is largely due to the fact that it is the meeting place of lines from the north and west of London. The first station, half a mile to the north of the present building, was opened in 1844. To-day Willesden Junction, 5½ miles from Euston, has low-level and high-level platforms. The Low-Level Station deals almost exclusively with main-line traffic, and the High-Level with suburban traffic. There is also a New Station, for electric trains between Watford and Euston, Broad Street, and the Bakerloo Tube.

WILLESDEN JUNCTION, five and a half miles from the Euston terminus of the LMS Railway, occupies a special place in the British railway system, and there is nothing quite comparable with it as an interchange point. It may not have the spect- acular importance of a Crewe or a Carlisle, but it combines many important functions. It is a busy main-line station, a transfer point for both goods and passenger traffic between the main lines north and south of the Thames, and a junction for suburban traffic to and from all parts of London. It is also a clearing house for merchandise passing to and from the London Docks, a locomotive and carriage depot, and a coal and cattle depot. Clapham Junction, described in the chapter beginning on page 1129, deals with a larger number of train movements, but Willesden, by virtue of its engine and carriage sheds - there are two of these - is a more complete and self-contained railway centre.

The position of Willesden Junction relative to the main railway system north of the Thames is analogous to that of Clapham Junction in regard to the lines south of the river. The two stations are, in fact, largely complementary, since so much traffic passes between them by way of the West London and West London Extension Railways; a link in the transport system of the country whose importance has never been realized by the general public. 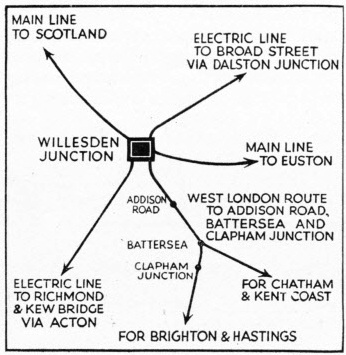 The importance of Willesden Junction is a matter of long standing. In the days when the London and North Western Railway was still a separate undertaking the station was a vital traffic-distributing centre for the Metro- politan area. In more recent years its prominence as an interchange point has increased, because of the electrification of the London and North

Western and North London (LMS) suburban tracks from Euston and Broad Street, and of the provision of through running between the Bakerloo Tube and Watford.

THE CONCENTRATION at Willesden Junction can be seen from this diagram, which shows how the lines converge on the station.

The present passenger station, which is, in fact, three stations in one, is the third, although its two predecessors were not on the same site. The first, which was opened in 1844, was about half a mile to the north of the exist- ing structure. It has always been one of the most cherished traditions of the London and North Western Railway that its building was due to the fact that the general manager at that time, Captain Huish, who was a particularly autocratic figure even among the autocratic high railway officers of the period, had a house close by and wanted a station close to his house. Support is lent to this story by the fact that the traffic possibilities of the neighbourhood at the time were extremely small. The second station was a little to the south of the junction, and was primarily provided for the purpose of interchanging traffic with the West London Railway. The first portion of the present building, which was enlarged in 1894, was opened in September, 1865, when the old structure was closed. From the beginning there have been both low-level and high-level stations. The Low-Level Station accommodates main-line traffic, and is connected by spur-lines with the high-level tracks. The High-Level Station, which is built across the main-line station, is an important junction in itself. It serves as an interchange point for traffic between the lines of the former North London via the “Outer Circle” line and those of the West London Railway.

The “Outer Circle” line from Broad Street crosses the main LMS Railway at Willesden Junction (High Level). Thence a line, formerly the North and South-Western Junction, proceeds south-west to Acton Central and Kew Bridge, with a connecting line from Acton to Richmond. At Richmond this line connects with the Southern Railway. The West London Railway runs south-east from Willesden Junction to Kensington (Addison Road), whence the West London Extension continues to Batter-

sea and Clapham Junction. Through LMS eclectic trains run on this line from the High-Level Station to Earl’s Court, on the District Railway, via Kensington (Addison Road). This service is all that is left of the former “Outer Circle” Broad Street -Mansion House service, which was worked by steam-hauled trains. Through LMS expresses, including the “Sunny South

Express”, from Liverpool, Manchester, Birmingham, and Sheffield, run from the Low-Level Station along the West London line. One section of this express goes to Clapham Junction and continues along the Central Section of the Southern Railway to Brighton, Eastbourne, and Hastings. The other section branches at Battersea on to the Eastern Division of the Southern,

for Chatham, Margate, and Ramsgate.

The New Station at Willesden Junction, which was opened in 1915, and is exclusively, given up to electric traction, is used both by Bakerloo and LMS trains. This station affords a striking example of the recent changes in the working of short-distance traffic in the London area. The London tubes, originally planned as short self-contained lines within the central London area, have been extended until they not only run many miles on the surface, but also link up with the main lines. A

further striking development of the kind is embodied in the new “Five Year Plan” for London transport, which contains schemes for linking up the tubes with the Great Western and LNE Railways. The track-approaches to the New Station merit special mention. In the early years of this century, the London and North Western Railway decided on a comprehensive

scheme that embraced both suburban electrification, with Watford as the ultimate objective, and widening the track so as to provide six running roads between Euston and Watford.

The first portion of these works to be finished was the Camden widening - one of the engineering wonders of our time - and the six-tracks road was then gradually extended as far as Willesden Junction. Here the additional roads, which from Queen’s

Park Station are used also by the Bakerloo trains, bear off to the right, or “up”, side of the Low-Level Station, so as to bring them into the new building. This position was rendered necessary by the tangle of sidings and junctions on the other side of the Low-Level Station. But a short distance to the north of Willesden Junction, the new tracks pass under the main line by means of a shallow tunnel, which brings them to the left hand of the main line at Wembley, eight miles from Euston. From Wembley there are six running roads to Watford. 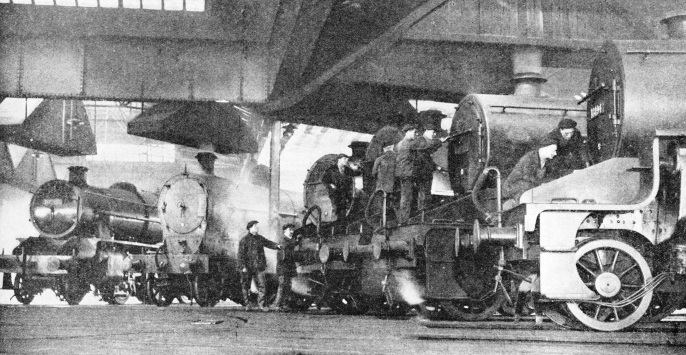 ENGINE SHEDS at Willesden Junction, where there is a large locomotive depot. Five of the above six locomotives are modern LMS engines, but the engine second from the left is a former London and North Western Railway 4-6-0 of the “Prince of Wales” class, now used on secondary services. The first of this class of 246 express engines was built in 1911.

Although the present traffic dealt with at Willesden Junction is greater than at any previous period in its history, it has lost one of its former distinctions. For years many of the express trains out of Euston and nearly all the up expresses used to stop at the station, where tickets were collected on the up journey. A reference to the London and North Western time-table for April, 1900, the cover of which is illustrated on page 904, reveals the fact that, while a dozen down expresses

omitted Willesden Junction, only two up expresses - a Birmingham train and a night express from Scotland - failed to stop there. To-day only a few expresses in either direction stop at Willesden, among them the fastest train from Liverpool to London.

On the down journey the stop at Willesden Junction was often made for locomotive purposes. When a train was heavy enough to require assistance up the Camden bank, but not heavy enough to need “double-heading” all the way, the pilot engine was detached at Willesden.

For some years a through restaurant-car train, the “City to City Express”, equipped with a type-writing compartment, was operated between Broad Street and Wolverhampton. This express stopped at Willesden Junction on the outward journey only.

From the standpoint of both passenger and goods traffic, the prominence of Willesden Junction is largely due to its position as the meeting place of the West London and North London systems. The former has already been the subject of considerable mention in this work. It need only be said here that, together with the West London Extension Railway, it forms the main link in the London area for the interchange of traffic between the LMS, Great Western, and Southern Railways. West London Railway history is bound up with that of Willesden Junction.

Three Stations in One

This is true, also, of the North London Railway, a line whose history has, from the beginning, been connected with that of the London and North Western Railway.

The North London was incorporated in 1846, as a subsidiary of the London and Birmingham Railway, which in the same year amalgamated with the Grand Junction, the Liverpool and Manchester, and other concerns, and became the London and North Western. Its original title was “East and West India Docks and Birmingham Junction Railway”, but the high-sounding name was justified, since the primary object of the line was to link up the London Docks with the London and Birmingham main line. No other railway with so small an owned route length (which never rose to more than sixteen miles) has ever been so large and important a dock owner, and the Bow “shops” have often been described, with justice, as a well equipped miniature Crewe.

The Low-Level Station at Willesden Junction has four long platforms, three of which are of the island type. There are nine running tracks, eight of which are platform roads, this total excluding the tangle of goods and shunting tracks on the down side of the station. Communication with the West London system is afforded by the tracks on the extreme left, or down side. For a station of such traffic importance, the lay-out is of striking simplicity.

The High-Level Station, which is built on a curve, has two platforms and three running roads. The main platform is of the island type, and serves the up and down through roads, the other being a smaller structure accommodating the Willesden and Earl’s Court trains that begin and end their journeys at this station.

The lay-out of the New Station, which is a separate structure connected with the High and Low-Level Stations by subways and footbridges, is also characterized by simplicity. There is one large island platform, serving two through and two bay roads.

THE “SUNNY SOUTH EXPRESS”, shortly after leaving Willesden Junction in the days before the grouping of the railways in 1923, hauled by one of the London, Brighton and South Coast 4-4-2 tank engines. The coaches are in the former LNWR colours - “purple-brown and spilt milk”. The Brighton, Eastbourne and Hastings section of the present-day express from the North calls at Willesden Junction and reaches the Southern Railway via the West London and West London Extension Lines and Clapham Junction. The other section also calls at Willesden, but branches off from the West London Extension Line at Battersea for Chatham and the Kent Coast.

You can read more on “Clapham Junction”, “The London & North Western Railway” and “The Royal Scot Route” on this website.