Part 20 of Railway Wonders of the World was published on Friday 14th June 1935.

This issue contained a photogravure supplement featuring Stations from the Air, a further selection of aerial photographs of some British railway stations. The supplement formed the central pages of this issue (pages 627-630).

The cover  of this week’s issue shows two LNER expresses passing Wood Green. No. 2552 is a 4-6-2 express passenger locomotive named "Sansovino", one of the famous "Pacifics" of the LNER. Many of these "Pacifics" are named after race-horses, and No. 2552 is named after Lord Derby’s horse that won the Derby in 1924. No. 3288 is one of the LNER “Atlantic” class, with a 4-4-2 wheel arrangement. The “Atlantics” are, in spite of their age (which is about thirty years or so), still used with great success for hauling important expresses of moderate weight.

The cover is unusual in having a colour bar at the bottom of the page drawing attention to other articles in the issue. 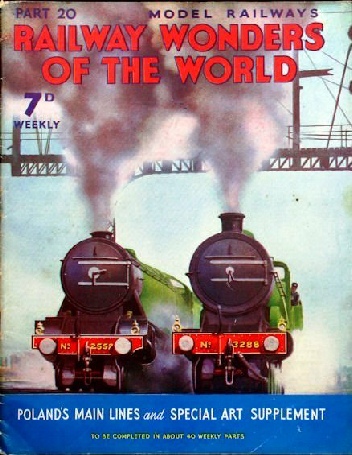 In this part, the various types of rail-cars in Britain, their comparative speeds and weights, and differences in the power units are fully discussed. The article is concluded from part 19

Descriptions of extensive organizations run in miniature. Nearly all railway enthusiasts have at some time wished to possess and operate a railway of their own; and this accounts for the large number of Model Railway Clubs that exist all over the United Kingdom. Model railways may vary in gauge from ⅝ in to 5 in or more. This chapter confines itself chiefly to the HO (Half O) gauge. The building of a private system and its equipment are discussed, which will serve as an introduction to this fascinating subject of model railway engineering. A sequel to this chapter appears in part 28.

Stations From the Air - 2

A photogravure supplement featuring a further selection of “Stations from the Air”. The locations featured here are St Paul’s and Holborn Viaduct, Glasgow Central Station, and Cannon Street. The first article appeared in part 11, and seems to have been among the most successful of the photogravure features.

Developing Poland’s railway system. The railway in Poland provides a most interesting story. The Great War devastated this country, and the work of reconstruction has of necessity been slow, but there are to-day more than 11,000 miles of tack open in Poland. Polish lines are composed of ex-German, ex-Austrian, and ex-Russian railways. The first line in Poland was begun in 1845, and that section now forms part of the main line from Warsaw to Vienna. Nearly all the railways are State owned and the lines about Danzig came under State control in 1920. The whole system radiates from Warsaw. It takes international traffic from west and central Europe to the Baltic States, to Russia, and to Romania. Poland is practically and economically one of the  most important countries in Europe; and its railways must, therefore, be of corresponding importance.

The Story of the Southern (Part 1)

The fascinating story of the Southern Railway, London's link with the South Coast. This company owns the largest suburban electrification system in the world. The Southern railway, which came into existence in 1923, includes five constituent companies, the London and South Western, the London, Brighton and South Coast, the London, Chatham and Dover, and South Eastern Companies, and the South Eastern and Chatham Managing Committee. There are also fourteen subsidiary companies. The Southern has an enormous suburban traffic, claims the largest share of Continental traffic, and has a total track mileage of 5,432. This article is completed in part 21.