Part 45 of Railway Wonders of the World was published on Friday 6th December 1935.

This issue contained a colour plate of the “Flying Scotsman” leaving King’s Cross Station. The colour plate was attached to page 1421. This plate had previously appeared as the cover to part 23.

This week’s cover shows the “Silver Jubilee” leaving King’s Cross Station on September 27, when the express performed its astonishing experimental run and broke four world's records, and twice achieved an amazing maximum of 112½ miles an hour.

In the editorial to part 44 Clarence Winchester referred to the thrilling experience “to every minute that I spent, in company with Mr Cecil J. Allen ... It was and must remain for ever a memorable experience.” 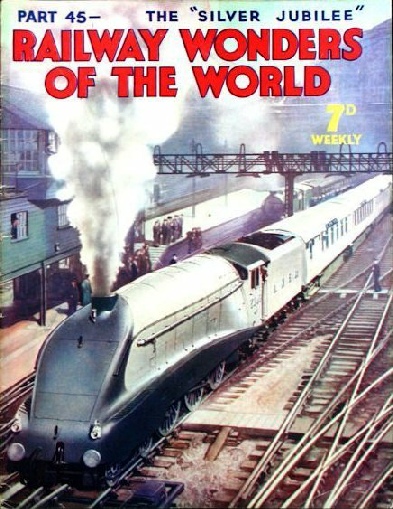 THE “FLYING SCOTSMAN” leaving King’s Cross Station, hauled by No. 2563, "William Whitelaw", one of the well-known 4-6-2, or "Pacific" three-cylinder express locomotives. In summer this train runs non-stop between King's Cross and Edinburgh in seven and a half hours - the world's longest non-stop run. During the rest of the year the train takes seven and three-quarter hours down, and seven and two-thirds hours up, stopping at Grantham, York, Newcastle and Berwick-upon-Tweed, and - on the up journey - at Darlington.

This plate was previously used as the cover for

There are three important joint railways in Great Britain, the Midland and Great Northern Joint Railway, the Somerset and Dorset Joint Railway, and the Cheshire Lines. The Somerset and Dorset is owned by the LMS and the Southern, while the other two are owned by the LMS and LNER. The busiest of these three railways is the Cheshire Lines, which is worked by a managing committee, with headquarters at Liverpool. The railway has a main line connecting Manchester Central and Liverpool Central. Manchester Central Station is of great importance; it handles nearly all the Midland Division traffic to and from the LMS. At Liverpool Central the Cheshire Lines deal with LNER and some LMS traffic into Liverpool, as well as with their own. This chapter describes these small but interesting systems with many interesting facts and figures.

QUEEN SQUARE STATION, BATH. From this station the Somerset and Dorset Joint Railway operates trains to Bournemouth West, a distance of 71½ miles, via Evercreech Junction and Templecombe. Queen Square, which is the terminus of the LMS line to Mangotsfield Junction, for Gloucester and Birmingham, is about one mile from the Great Western Railway's station at Bath.

First opened in 1906, the Simplon Tunnel, 12 miles 668 yards in length, is the world’s longest tunnel. The second parallel tunnel, 50 ft away from the first, was finished in 1921, and the two are connected by transverse galleries. It was a gigantic and heroic enterprise to bore through the mountain mass of the Alps when railway engineering machinery was still at an early stage of development. Among the apparently insuperable difficulties that had to be conquered was a tremendous volume of scalding water which gushed from the borings and menaced the lives of the workmen. But, undaunted, with mountain peaks rising to 4,500 ft above them, the constructors pushed forward through the rock.

You can read more on the Simplon Tunnel in Wonders of World Engineering.

One of the most fascinating angles of Railway Wonders of the World, so far a the Editor is concerned, is the business of having to travel on the crack trains. Who among so many readers of this publication would not have thrilled to every minute that I spent, in company with Mr Cecil J. Allen, my Consulting Editor, on the “Silver Jubilee” Flyer of the LNER? It was and must remain for ever a memorable experience, as you will gather from Mr Allen’s chapter. On the day in question the “Silver Jubilee” with engine No. 2509, “Silver Link”, and with a load of seven vehicles of 230 tons gross, set out from King’s Cross for a record-breaking trip to Grantham. It was an experimental run - but what an experiment! From New Southgate to Potters Bar the speed increased from 71½ mph to 75 mph up a continuous 1 in 200 grade; on the descent to Welwyn Garden City 98 was reached. At mile-post 30, beyond Stevenage, the 100 mark was crossed, and for the next 25 miles the speed never fell below 100 miles per hour, twice reaching a maximum of 112½, first at Arlesey and then between Biggleswade and Sandy. What is even more remarkable is that for a distance of approximately 43 miles the average continuous speed was 100 miles an hour, and that from Wood Green to Fletton Junction the distance of 70 miles was covered in 45 min 44 sec at an average speed of 91.8 mph. It is unnecessary for me at this juncture to deal further with this, the latest and most significant of British trains, as Mr Allen’s valuable chapter describes it and its performance most adequately. All I will add are my congratulations to Driver J. Taylor and Fireman A. Luty, for their achievements have done much to increase the already high prestige of British railway work. The article is the fifteenth in the series on Famous Trains.

You can read more on the A4s in Wonders of World Engineering.

OVER SEVENTY MILES AN HOUR. A remarkable photograph of the “Silver Jubilee” climbing the 1 in 200 gradient past New Barnet, some nine miles out of King’s Cross, at a speed of nearly 75 miles an hour during the Experimental run. About forty-three miles of the journey to Grantham were covered at an average speed of 100 miles an hour.

Click on the small image to see a short British Pathe newsreel clip of the Silver Jubilee’s experimental run - “the world’s fastest train”.

In Chicago, freight is conveyed underground in a huge system of tunnels, totalling sixty-two miles. The Chicago freight tunnels form an integral part of Chicago’s method of collecting and distributing freight which leaves or enters the city by railway. A large number of the biggest commercial houses possess connexions with this unique underground system, which has come to play a vital part in the industrial affairs of Chicago. The article is concluded in part 46.

THE BEVERA VIADUCT, near the town of Breil is this viaduct of unusual construction. It consists of four masonry arches, each of 26 ft span, and of two steel girder spans, each 150 ft long. These steel girders are, as can be seen, supported in the centre by a single masonry arch set at right angels to the axis of the bridge, and crossing the gorge.

Cecil J Allen’s detailed times and speeds of the experimental run of the “Silver Jubilee” on September 27 1935. Allen notes in his article “It was small wonder that signal checks soon followed [after passing Peterborough] for “Silver Link” had caught up the regular express which had left London forty-five minutes previously.”

all image to see a short British Pathe newsreel clip of “Silver Link”.

A Link with the Mediterranean

A Link with the Mediterranean

Remarkable engineering in southern Europe. This chapter describes the construction of the lines from Breil to Nice, and from San Dalmazzo di Tenda to Ventimiglia. Both railway lines rank among the finest engineering achievements in Europe. They are remarkable for their many technical features as well as for the natural beauties of the districts traversed. 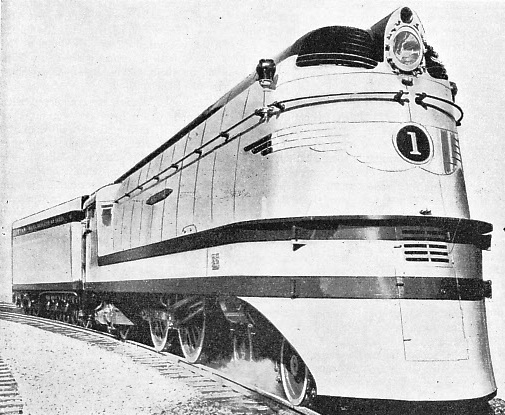 STREAMLINING IN AMERICA.  The “Hiawatha” is one of the fastest trains in the USA; the photograph shows one of the locomotives of unusual design which haul the train. The “Hiawatha” covers the 280.8 miles between Chicago and La Crosse (Wis.) In four hours and eleven minutes, giving an average speed of 67.1 miles an hour, including three stops, and the entire 410 miles to St Paul in 6½ hours. 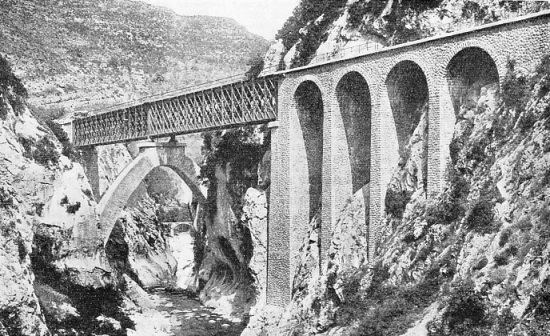 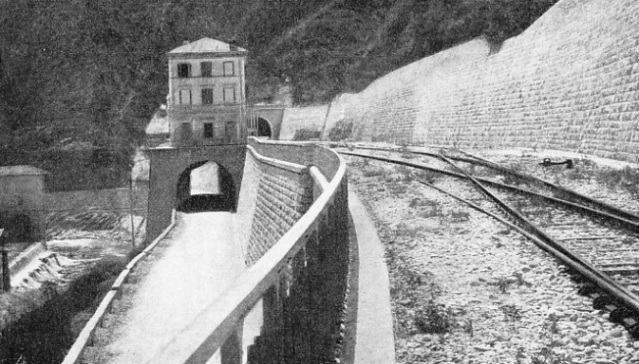 The Station of Piena

THE STATION OF PIENA on the Cuneo-Ventimiglia Railway. In the background is the mouth of the Fromentino Tunnel. The total number of tunnels on the line - sixty-two miles long - is sixty, and their total length is twenty-one and a half miles. 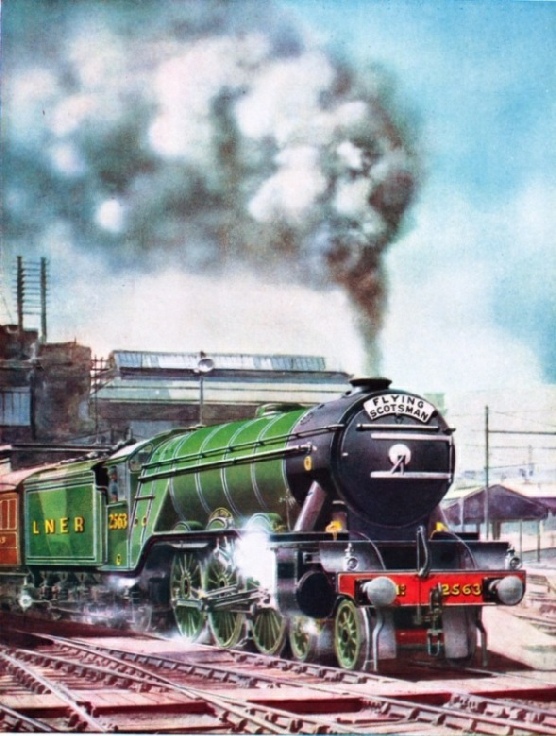 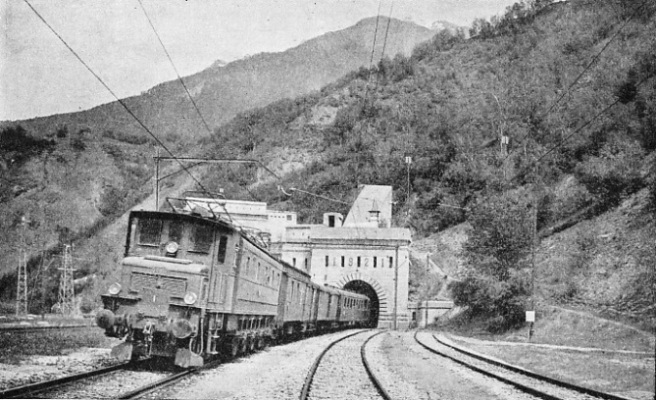 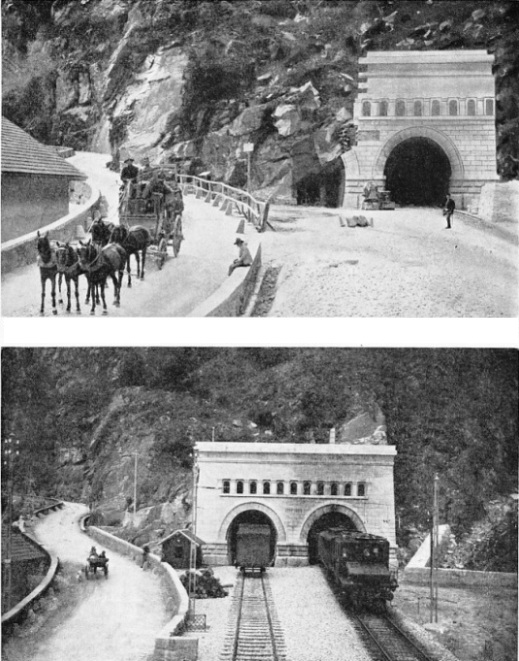 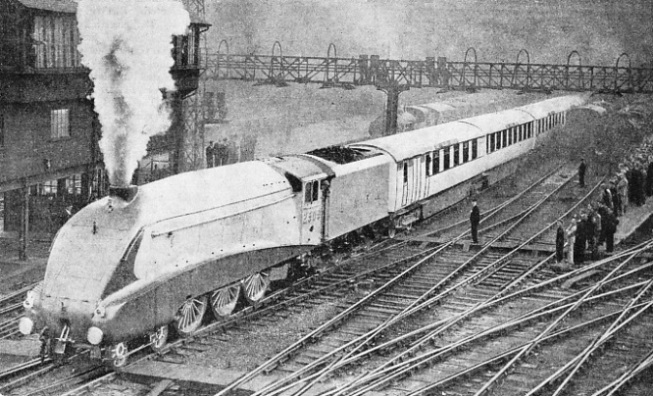 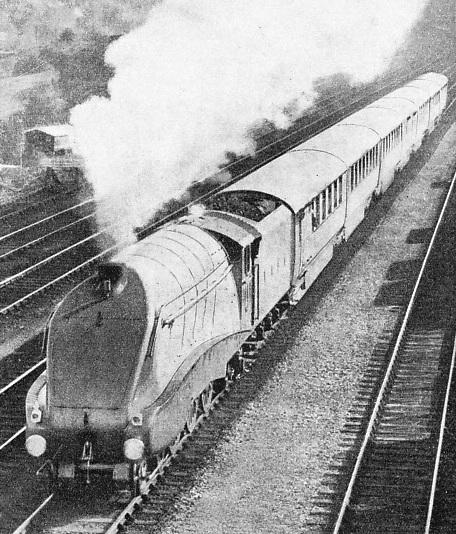 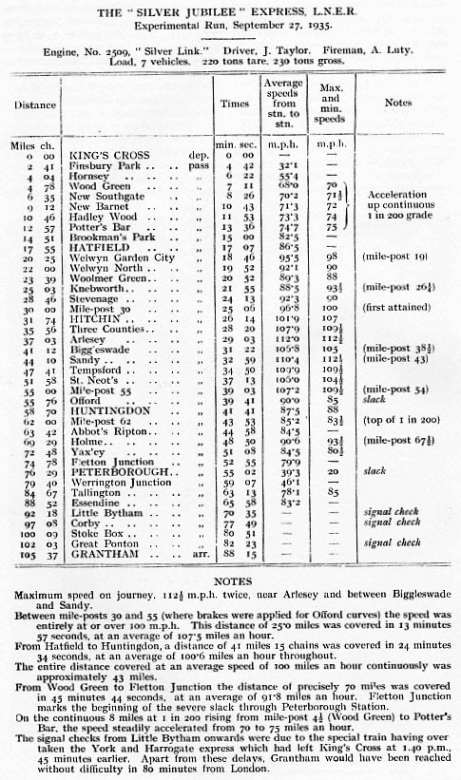 The North Portal of the Simplon Tunnel

THE NORTH PORTAL of the Simplon as seen after the completion of the second tunnel in 1921. The double tunnel, the longest in the world - 12 miles 668 yards in length - was begun in 1898. The first tunnel was opened in 1906. The second tunnel is parallel with the first, and the axes of the bores are some 55 feet apart.

The Simplon Tunnel Yesterday and To-Day

THE SIMPLON TUNNEL YESTERDAY. This interesting illustration shows the southern entrance as it appeared shortly before completion in 1906. Beside the main portal can be seen the service tunnel, later widened and converted to a second tunnel. On the left is the famous Simplon road, with a fast coach of the type used to carry the mails before the tunnel came into use.

THE SIMPLON TUNNEL TO-DAY makes possible the rapid rail services between the two main western capitals, London and Paris, and the south-eastern cities of Europe. The above illustration shows an electric express emerging from the south portal of the Simplon near Iselle.

BEGINNING THE RUN. On September 27, 1935, the new LNER streamlined express, the “Silver Jubilee”, undertook a demonstration run between King’s Cross and Grantham, Lincolnshire. On the journey the train created four world’s records, and twice attained a maximum speed of 112½ miles and hour. The picture shows the “Silver Jubilee” leaving King’s Cross Station.

A Universal Freight Station on the Chicago Freight Tunnel System

A UNIVERSAL FREIGHT STATION on the Chicago freight tunnel system. Four of these freight stations give the general public access to the tunnel services. The tunnels link up with all the city's railway goods termini, and many private warehouses and stores also have direct links with the freight tunnels. These connexions consist of shafts and elevators that bring the tunnel cars up to ground level..