Some Examples of Railway Philately 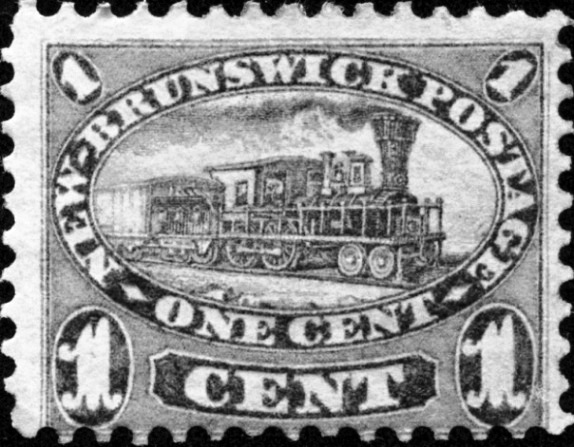 New Brunswick 1 cent lilac postage stamp. Issued in 1860, it is the first image of a train to appear on a stamp.

JUST AS THE WAR with Napoleon went largely unnoticed in the novels of Jane Austen, so early railways were very sparsely represented on postage stamps, although social historians might regard them as equally significant. Europe did not notice railways until their centenaries, and one must go to Canada to find the first stamp issued specifically to celebrate the opening of a railway. That was the one-cent New Brunswick stamp of 1860, which had a locomotive design to mark the inauguration of the line from Pointe-au-Chene to Saint-Jean. Other values in the set, however, had different designs unconnected with the railway.

It was in 1860, also, that Peru took the decision to build a railway from the coast into the Andes to bring down the mineral wealth of zinc, lead, copper and silver mined around the town of Oroya. The coastal section of the line was the first railway in the country, and when it was opened in 1871 Peru issued a five-centavos stamp showing a 2-4-0 tender locomotive in profile within a border displaying the names of the principal places served (Callao, Lima and Chorrillos). The line was the genesis of the Central Railway of Peru, which now extends for 216 miles from the Port of Lima at Callao to Huancayo, 78 miles beyond Oroya, and in crossing the Andes reaches an altitude of 15,610 ft above sea level at Ticlio (15,848 ft before the Galera tunnel was bored. 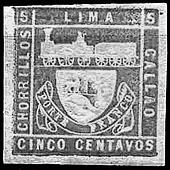 Peruvian five centavos stamp issued in 1871 to commemorate the opening of the railway serving the mines around Oroya.

The foregoing examples are isolated railway stamps in series showing other subjects as well, but they are records of railway events. Collectors will be familiar with many stamps showing locomotives, trains or other features of railway engineering which are not associated with any particular railway happening. In such cases the railway theme was usually chosen to represent technical progress in the countries concerned.

The first complete set of stamps commemorating a railway event came in 1907 from Ecuador, where the first railway in the country had just been completed between Guayaquil and Quito. Of the seven values in the series, the one-centavo shows a locomotive, the two, five, 10, 20 and 50 centavos are portraits, and the one-sucre is a view of Mount Chimborazo.

For the first century of railways, Britain held 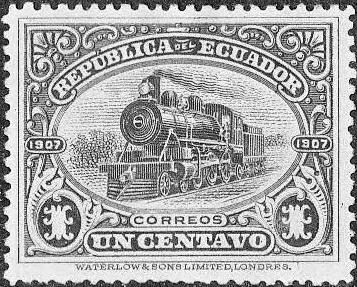 aloof from commemorative stamps, and although the first Wembley Exhibition stamps were produced in 1924, the Railway Centenary of 1925 went unrecorded in the stamp catalogues.

One of the stamps issued by Ecuador in 1907 to commemorate the opening of the railway between Guayquil and Quito. This was the first set of stamps to commemorate a railway event ever issued.

The Belgian Post Office similarly passed over the centenary in 1935 of opening the railway from Brussels to Malines, which began the railway age in that country. A commemorative set was issued, however, by the Belgian National Railways for its parcels service. Ten values, from 10 cents to 90 cents, show a diesel train and the 15 values from one franc to 100 francs are of the early locomotive “Le Belge”. 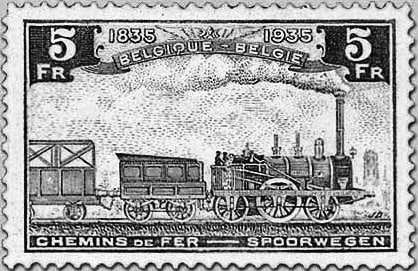 One of the parcels stamps from the set issued in 1935 marking the centenary of the railway in Belgium. The locomotive is “Le Belge”.

From 1936, however, there was a spate of centenary issues, with pictorials ranging from early steam locomotives to the French Class 241-A, the “Flying Hamburger” diesel train and the latest in electric traction.

In 1944, France commemorated two centenaries in a single stamp, the four-franc National Relief Fund issue recording the opening in 1843 of the lines from Paris to Orleans and to Rouen. Its striking design sets a driver at the cab window of a modern main-line steam locomotive against a small inset of a locomotive and train of a hundred years earlier. 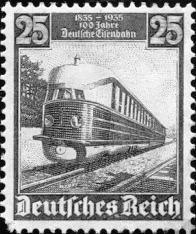 One of the stamps issued by Germany in 1935 to mark the centenary of its railways. This stamp shows the “Flying Hamburger”.

In North America, a 75th anniversary was commemorated in 1944 - that of the completion of the first transcontinental railway, recorded by the issue of a single three-cent stamp showing a locomotive and welcoming crowds.

In Canada, the centenary of the Grand Trunk Railroad in 1951 coincided with that of the first Canadian postage stamps and the commemorative set is postal rather than railway orientated. The four-cents design shows steam- and diesel-hauled mail trains, the five-cents shows steamships, and the seven-cents stamp has a reproduction of the three-pence beaver design of the 1851 series.

South America is rich in railway commemorative issues from the 1930s onwards, sometimes of lines of only local interest, although collectively such stamps do give a picture of how the railway systems in the various countries were built up. 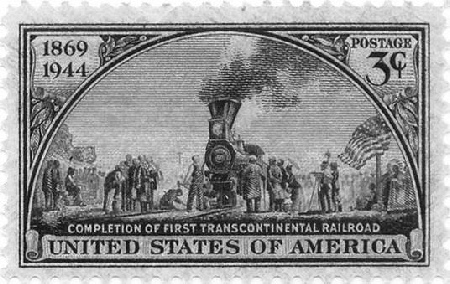 United States’ 3 cents stamp issued in 1944 to commemorate the completion of the first transcontinental railroad.

Two 1932 sets from Nicaragua commemorating the openings of the Rivas and the  Leon-Sauce railways have become very rare. Each has ten values with scenes on the respective railways, representing stations and civil engineering works rather than the trains.

Egypt was the first of the countries in Africa to commemorate a railway centenary on a stamp, doing so in 1957 with a 10 milliemes design showing an early locomotive and a modern express train.

Among the countries of the Far East and the Pacific, Japan leads with railway anniversary commemoratives, having celebrated the 70th (in 1942) and 75th (in 1947) anniversaries of its national railway system. India, Pakistan, Australia and New Zealand have confined themselves to centenary stamps. 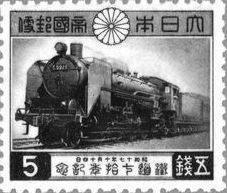 In addition to commemorating national railway openings, stamps have often celebrated new links between two countries. Events of this kind have been chronicled in the stamp catalogues since 1929, when Guatemala completed its rail connection with Salvador. Sometimes both countries concerned have issued stamps celebrating the rail link between each other in this way.

Stamp issued by Japan in 1942 commemorating the 70th anniversary of its railways.

About 20 railway pioneers and inventors figure on stamps of various countries. Hungary honoured both George Stephenson and its own Kalman Kando in an explorers and inventors series in 1948, which oddly enough was issued for air mails. Hungary is a prolific source of stamps with railway designs. Belgium includes Walschaerts in a set put on sale in 1955, illustrating scientists, in connection with the Cultural Fund. 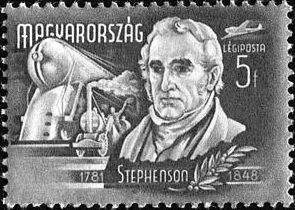 Electrification schemes, new underground lines and in recent years the introduction of new locomotives have all been recorded in stamps. Rail postal services also have various stages of their development represented in the stamp catalogue. The increasing number of pictorial and commemorative stamps issued all over the world is certain to give railways a better representation in their second century than they enjoyed during their first hundred years.

One of the air mail stamps issued by Hungary in 1948 commemorating explorers and inventors. This stamp honours George Stephenson.

You can read more on “Railways and Publicity” and “Railways in Art” on this website.