Part 16 of Railway Wonders of the World was published on Friday 17th May 1935.

This issue contained a black and white art plate depicting the Automatic Coaling Stage at Hornsey, Middlesex. The plate was attached to page 493, the fifth page of this issue.

This week’s cover shows Germany’s latest streamlined locomotive. The whole of the boiler front, buffer beam, and cylinder head are covered with curved plates, offering the minimum or air resistance of the locomotive, which is said to be capable of speeds in excess of 100 mph. The doors in the plating, which, it will be noted, is carried almost down to rail level, give access to the smoke-box and to various portions of the mechanism. The electric headlights, with the siren just in front of the chimney, give a striking impression of this continental giant.

This illustration was later used as the art plate issued with part 28. 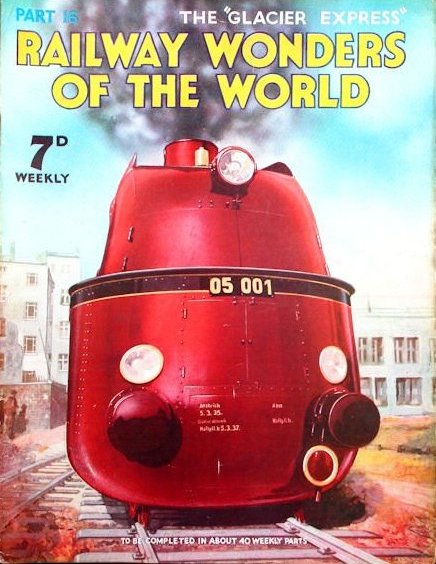 The development of carriages from wooden chariot to all-steel Pullman. Between the first railway carriage - known as Experience - and the modern all-steel Pullman, 70 ft long, there is a story that is as fascinating as any in the history of the railways. Sequels to this article cover International Sleeping Cars (parts 36-37), Modern Passenger Rolling Stock (parts 38-39) and Rolling Stock Construction (part 48). 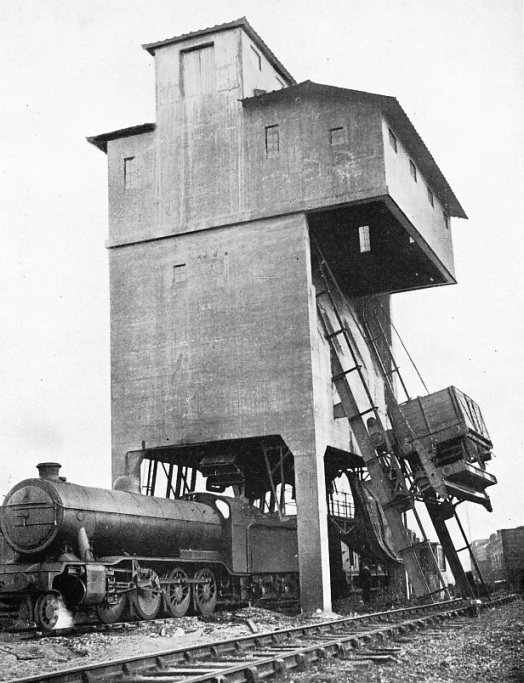 AUTOMATIC COALING at Hornsey Station, Middlesex. This coaling plant, owned and operated by the LNER, has a capacity of 200 tons. It is divided into two compartments so that different quantities of coal may be served. The plant is electrically and automatically worked, the driver of the locomotive pressing a button which indicates the requisite number of tons. One thousand two hundred tons of coal are delivered by the plant every week.

An account of the route from St Moritz to Zermatt over a series of metre-gauge lines. The “Glacier Express” travels through some of the most spectacular and beautiful scenery in Europe.  The description of the journey is fascinating in itself, but the story that lies behind the making of the railway is even more fascinating. The amazing skill of the Swiss engineers and the engineering devices they were obliged to adopt to carry the track through seemingly impassable mountain barriers form the subject of one of the greatest stories of railway endeavour. This is the eighth article in the series on Famous Trains.

A survey of the Scottish railway system, and its development from the early days. It contains descriptions of some of the more famous Scottish stations. Lybster in Caithness is over 742 miles from London, and is at the end of a railway system north of the Border that is full of interest to all railway enthusiasts. A sequel on Scottish Mountain Railways appears in part 22.

An account of how railways are carried across river and valley. There is frequently some confusion of thought over viaducts and bridges; viaducts are often wrongly called bridges. The Tay Bridge, for example, is not a bridge but a viaduct. Viaducts are not only vital links in railway communication, but they are also superb examples of engineering.

A Gateway to Brazil (Part 1)

The story of the Sao Paulo Railway, “the trunk line that climbs a precipice”. It was built by an English engineer, and one section of the line, known as the New Serra Inclines, is cable-operated. Trains are hauled up a gradient of 8 in 100, and in spite of the difficulties of transit four million tons of goods pass over the Sao Paulo Railway in the course of a year. This is the third article in the series on The World's Strangest Railways. This article is completed in part 17.

You can read more on the Sao Paulo Railway in Wonders of World Engineering.