Part 25 of Railway Wonders of the World was published on Friday 19th July 1935. It formed the first part of Volume 2.

This issue contained a black and white art plate called On the Route of the “Cornish Riviera Limited” which formed the frontispiece this volume. The plate was attached to page 773, the first page of this issue. It had previously been used as the cover design for part 11.

The cover this week shows the "Cornish Riviera Express" drawn by one of the famous "King" class locomotives on the beautiful stretch of line between Dawlish and Teignmouth. This train leaves Paddington Station at 10.30 every morning and in the summer runs non-stop to Plymouth, 225½ miles away, in four hours. In winter time the run is non-stop to Exeter, which is 173½ miles from Paddington. The normal formation of the train is fourteen coaches, weighing with passengers and luggage 500 tons. This may occasionally be increased to sixteen coaches, weighing 575 tons loaded. The "Cornish Riviera Express" had no fewer than eight sections." The locomotive shown is No. 6003 "King William IV", and this view also appears as the colour plate issued with part 36. 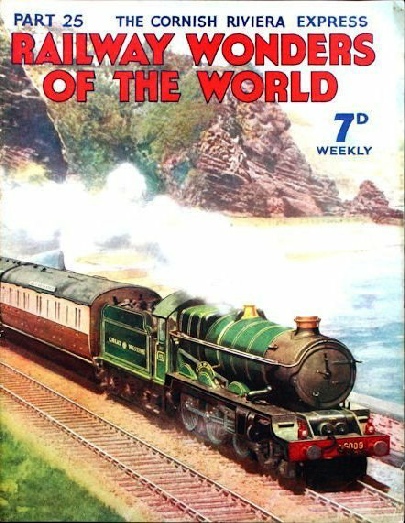 The “Cornish Riviera Express” first ran in 1904, when it consisted of five light weight corridor coaches and dining car. The weight behind the engine amounted to 140 tons. To-day the minimum formation of the train is fourteen carriages, amounting to approximately 500 tons. At busy seasons this figure can be increased, by extra coaches, to 575 tons. For many years the “Cornish Riviera Express” held, in the summer, by the LNER "Flying Scotsman", and for the rest of the year by the LMS express "Royal Scot". The “Cornish Riviera Express” now covers the distance from Paddington to Plymouth in four hours. This is the ninth article in the series on Famous Trains.

On the Route of the Cornish Riviera Limited

This black and white art plate forms the frontispiece to this issue and the start of Volume 2. The illustration was previously used as the cover for part 11.

ON THE ROUTE OF THE “CORNISH RIVIERA LIMITED”. An express on the Great Western line near Hanwell, a few miles out of Paddington. The train is hauled by the “King” class locomotive "King Henry II". The locomotive has 6 ft 6 in driving wheels, four cylinders 16¼ in. diameter by 28 in stroke, carries 250 lb per sq in working pressure, and weighs with tender 135¾ tons in working order.

This bridge carries the Nigerian Government lines across the Benue River. The construction was begun in 1928 and finished in 1934. The bridge is one of the longest in Africa. Its total length is 2,584 ft. It has ten deck spans of 180 ft, and three through spans of 240 ft each, carried on concrete piers. The three middle spans, which are above the navigation channel of the river, stand at 37 ft above flood level. The cost of building the bridge, including the two approaches, was more than £1,141,000; 8,600 tons of steel, 84,900 tons of concrete, and 700,000 rivets wee absorbed in the construction of the piers and abutments.

Carrying trains over mountainous gradients. The rack rail - that is, a toothed rail which engages a power-driven pinion on a locomotive and enables the train to surmount steep gradients on which normally the wheels would spin uselessly. The rack-rail system is an important and necessary part of railway practice. Without it few mountain railways could have been constructed, and with its help the engineer had been able to make trains climb gradients as steep as 1 in 2. This is, of course, an extreme gradient, but a railway that travels up Mount Pilatus in Switzerland has a maximum gradient of 1 in 2. This railway is 3 miles long and rises 5,347 ft. In that short stretch. This chapter also describes the Fell system, which is widely used throughout the world.This is the eighth article in the series on Design and Invention. The article is concluded in part 26. 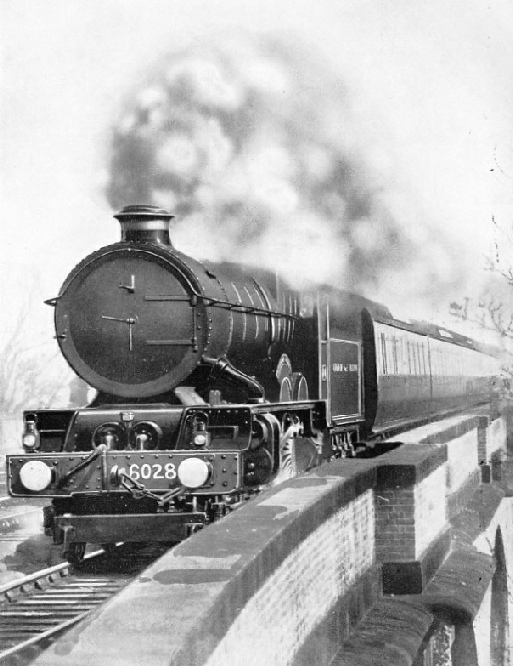 The Down “Cornish Riviera Express”

THE DOWN “CORNISH RIVIERA EXPRESS” near Reading West Station, thirty-seven miles out of London. The express is here being drawn by the “King” class engine “King Edward I”. This, the most famous class of GWR express locomotives, normally hauls the train.

A further chapter on the latest railway developments in Germany. It includes a description of a remarkable rail-car that is propelled by an aero engine and a single air screw. It is claimed that this train has reached a speed which exceeds two miles a minute. Various types of rail-cars, notable trains, the latest developments in electrification, some of the giant electric locomotives, and the Bavarian Zugspitze Railway are also included in this survey.

Click on the small image to see a short British Pathe newsreel clip of “The Railway Zeppelin” in action (1930). 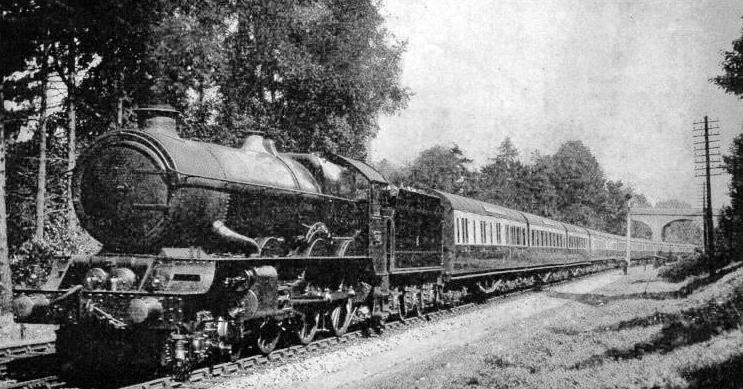 The “Zeppelin on Wheels”

THE “ZEPPELIN ON WHEELS”. This rail-car, invented by Dr. Kruckenburg, reached a speed of over two miles a minute between Berlin and Hanover during experimental runs, but was never taken into regular service. The car accommodated forty passengers and was driven by a four-bladed propeller.

The history of electric traction. The first experimental electric railway is said to have been invented by Thomas Davenport, of Vermont, USA. In 1847, Professor Farmer was responsible for building an electric car carrying two passengers at Dover, New Hampshire. From that day many experiments were carried out in all parts of the globe. The development of  electric traction is an outstanding example of how scientific progress on the railways has been made possible by the collective efforts of men working simultaneously all over the world. You can read more about the history of electric traction in Frederick Talbot’s Railway Wonders of the World (1913) 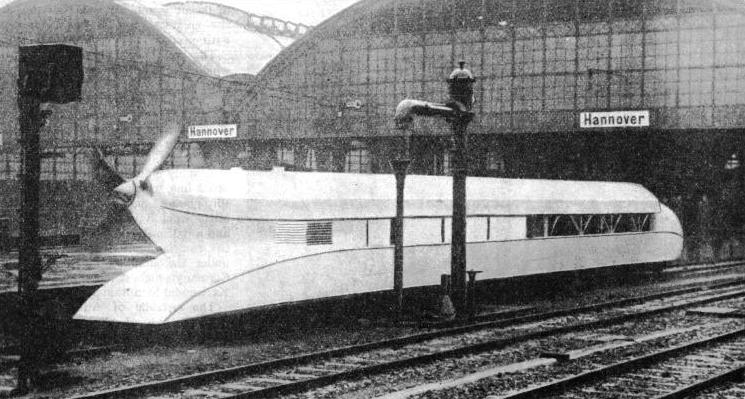 The Siemens Electric Railway of 1879

THE SIEMENS ELECTRIC RAILWAY laid down at the Berlin Exhibition of 1879. The short line was about 600 yards long, and current was drawn from a third rail between the track which acted as the return to the dynamo. The locomotive hauled a maximum of some thirty passengers at a speed of about four miles an hour. This historic illustration shows one of the earliest trainloads of passengers, seated upon three carriages.

On the Paris Underground

ON THE PARIS UNDERGROUND. A train entering the station of Place d'Italie. The first section of the Paris Metropolitan Railway was opened in 1900 from Porte Vincennes to the Porte Maillot. The line is electrically operated at 600 volts dc. Nearly all the stations are near street-level.

There are nearly 2,000 miles of line open in Nigeria, and the systems are under the Nigerian Government. The Benue Bridge (shown below), which was opened in 1932, is one of the finest rail and road structures in Africa, and is 2,584 ft. long. The Sierra Leone Government Railways are smaller, and it is interesting to note that more than half their goods revenue is derived from the transport of palm kernels. This is the eighth article in the series on Railways of the Empire. 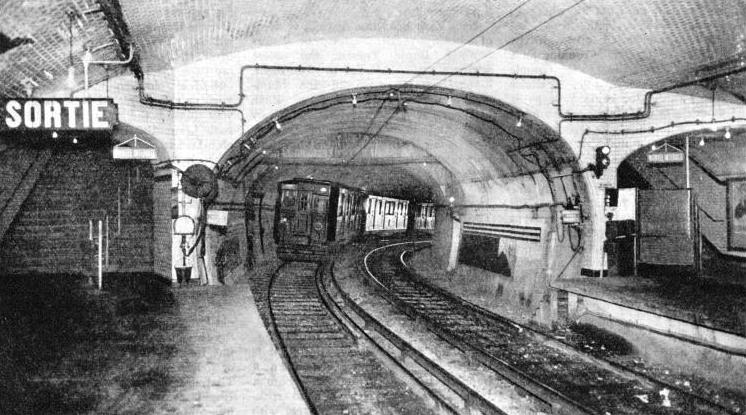 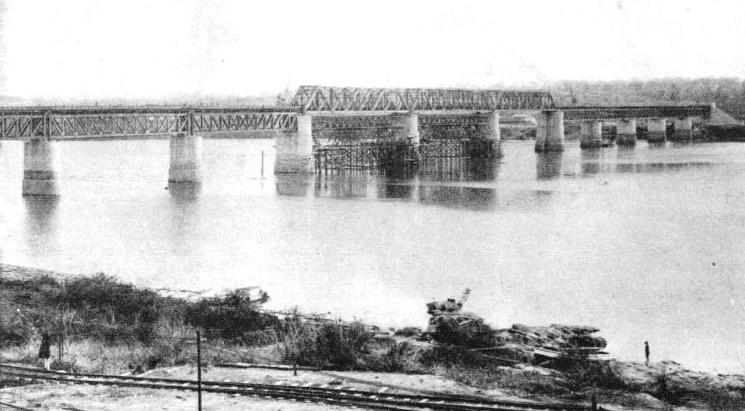 A RACK-RAIL SYSTEM patented in 1834. On the inner side of the two flat-topped running rails a horizontal rack was provided. A capstan was to have been used for driving the carriage by means of a pinion wheel engaging with the rack. The wagon was to have been fitted with a roller at either end, running in a hollow central rail, to guide it along the track.