Part 26 of Railway Wonders of the World was published on Friday 26th July 1935.

This issue contained a photogravure supplement illustrating a variety of railway architecture. It accompanies the article of the same title on pages 816-825.

Our cover this week depicts the celebrated LNER cruising train - "The Northern Belle" - which annually makes a tour of 2,000 miles. The train, which originated in 1933, comprises 15 luxury coaches. They are hauled up to Scotland by a "Pacific" engine, but over some of the branch lines in the Highlands and the North of England, two lighter locomotives are needed, as shown in this splendid picture. 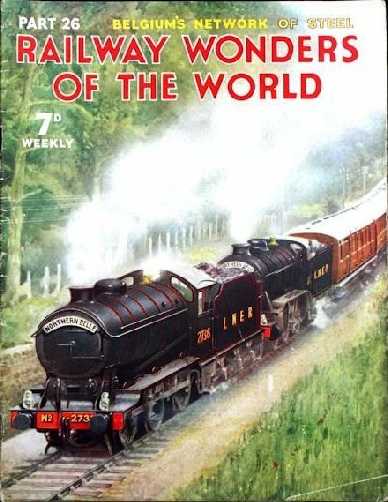 AN EXPRESS PASSENGER LOCOMOTIVE, type “8”, with the 4-6-0 wheel arrangement. This locomotive is a compound with two high-pressure outside cylinders. The high “capuchon” in front of the chimney is a feature of many Belgian engines; it is fitted for smoke deflection purposes. Note should also be taken of the prominent way in which the engine number is displayed on the smokebox door. This type of engine is being superseded by more powerful types.

ONE OF THE “SOUVENIRS” - the name given to old 2-4-2  locomotives of this class by British soldiers during the war. The square chimney was formerly a common feature of some Belgian locomotives.

Construction and operation of some steeply graded routes. This chapter describes a number of these systems based on gauge and geographical or traffic conditions. The Darjeeling-Himalayan Railway is described in part 22, and this chapter covers the Thal and Bhore Ghat, the Mushkaf-Bolan, the Sind-Pishin, Khyber, Nilgiri, Lashio, Southern Shan, Kangra Valley and Kalka-Simla railways.

Carrying trains over mountainous gradients. This section describes the Fell system, the Abt system, the Snowdon Mountain Railway, the Blenkinsop system, the Locher system, the Riggenbach system and the Wetli system. Concluded from part 25.

Designs that combine elegance and utility. That modern railway architecture combines utility and elegance will be seen from a superb photogravure supplement which accompanies this chapter. It traces the development and design of railway building, and will describe the more outstanding modern designs, such as the station at Versailles, the stations on the Southgate extension of the London Underground, and the vast main station at Leipzig, which is claimed to be the largest on the German State Railway’s system. The article includes a photogravure supplement.

A MEDIEVAL-STYLE RAILWAY BRIDGE. Conway castle in North Wales is one of the finest old castles extant. The main LMS line from Euston Station, London, to Holyhead runs through the castle ground. The architecture of the bridge has been designed to match the historic ruins. The railway bridge across the River Conway is parallel to the Conway Suspension Bridge, The railway bridge was constructed in 1846-1848 by Robert Stephenson.

CHARING CROSS STATION is typical of railway architecture in the nineteenth century. The station, now a terminus of the Southern Railway, was formerly the terminus of the South Eastern. The building was opened in 1864; it is to-day 680 ft. Long and 170 ft. Wide. Approximately 950 trains are handled daily, all crossing the River Thames by the bridge shown in the background. Before the war nearly all the Continental traffic left from Charing Cross, but has now been concentrated, with that of the Brighton Section, at Victoria.

The most concentrated in the world. Belgium is by no means one of the largest European countries. It comprises only 11,755 square miles. Yet it possesses a denser network or number of miles of track per square mile than any other country in the world. The explanation of this interesting fact is that Belgium is a highly developed industrial country, Belgium’s first line opened in May, 1835. As with some other countries, such as Germany, the first locomotive to run in Belgium was British built. This chapter describes the history and development of a system that carries more than 100,000,000 passengers in one year. 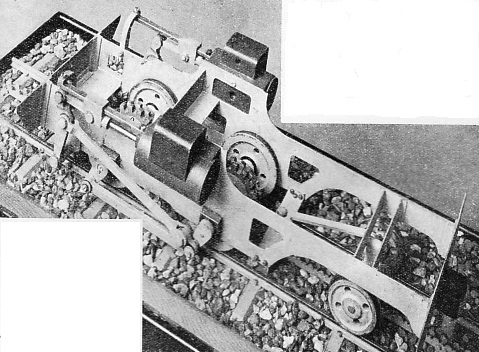 THE SNOWDON MOUNTAIN RAILWAY in Wales employs the “Abt” system illustrated here. This type of rack rail, patented in 1882, has teeth cut in the edges of narrow rectangular bars which are fitted in pairs to the sleepers so that the teeth of one rack are opposite the indents of the other. 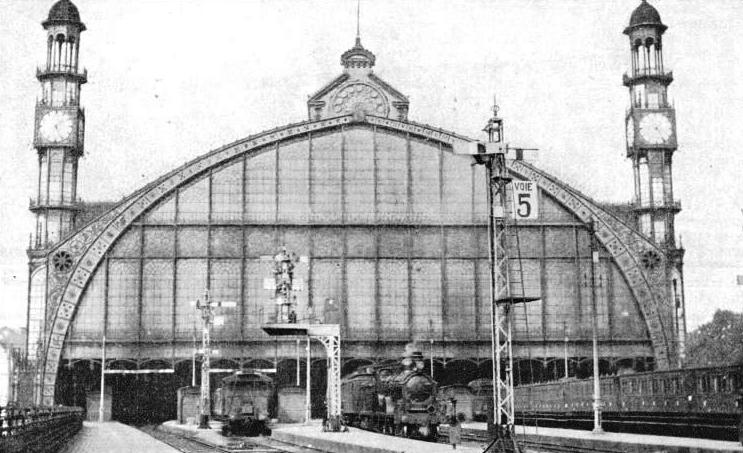 The Terminus at Antwerp

THE TERMINUS AT ANTWERP, an important station on the Belgian National system. One of the four half-rose windows of the cupola is seen in this illustration. 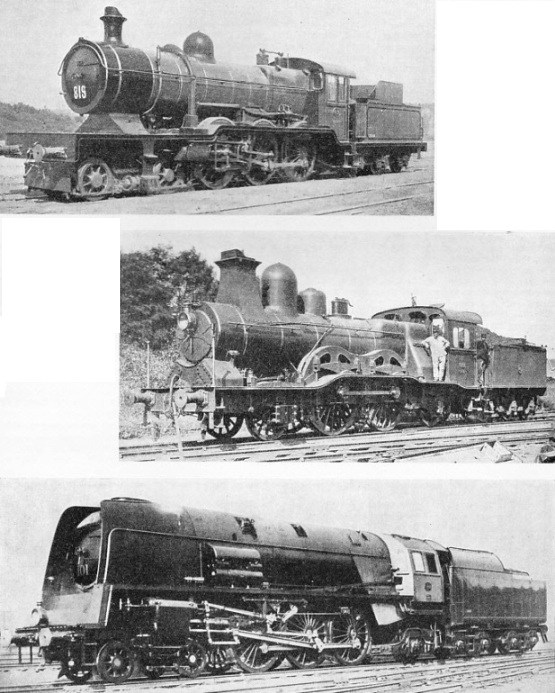 A MODERN “PACIFIC” locomotive operating on the Belgian National Railways. The engine was built in 1935, and, except for its wheel arrangement, closely resembles the LNER “Cock o’ the North” type. There are fifteen of these four-cylinder engines, each weighing with tender about 200 tons. The couple wheels have a diameter of 6 ft 5¼ in. 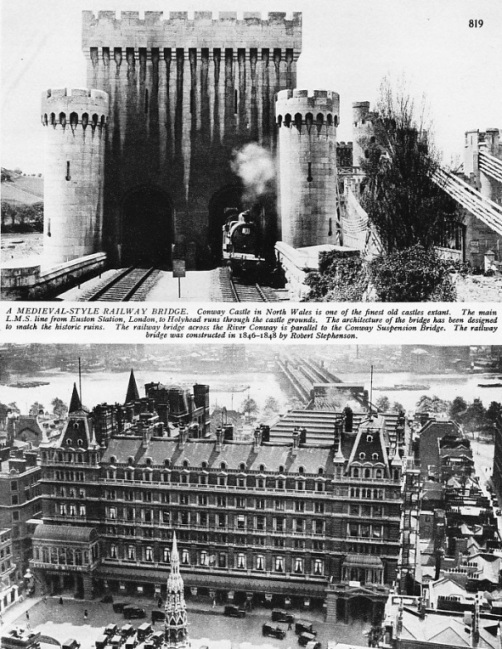 AN ABT SYSTEM rack railway locomotive built by the Swiss Locomotive Company, Winterthur, for the Nilgiri branch of the South Indian Railway. The cylinders driving the axles operating the rack pinion axle can be seen above the adhesion engine with its long

The control of steam in a railway engine. This chapter explains a vitally important item in connexion with a locomotive. Various types of simple link motions are described, including Stephenson’s, Gooch’s gear, Carmichael’s valve gear, and the improved Gab gear. This is the ninth article in the series Design and Invention, and is the first of three describing the various locomotive valve gears. This article concludes in part 27.

STEPHENSON VALVE GEAR, the joint invention of Williams and Howe in 1842, was first applied to locomotives by Robert Stephenson & Co, and is still in use throughout the world. This picture shows a working demonstration model of the gear in the Science Museum, South Kensington.