Part 36 of Railway Wonders of the World was published on Friday 4th October 1935.

This issue contained a colour plate of The Cornish Riviera Express. The colour plate was attached to page 1133, or the fifth page of this number. This plate had previously appeared as the cover to part 25.

The cover this week shows the “Union Express” leaving Capetown for Johannesburg. The train is hauled by a

4-8-2 mixed traffic locomotive, built by the North British Locomotive Company Ltd., for the South African Railways. The engine has cylinders 24 by 28-in. Coupled wheels measure 4 ft 9-in, and working-pressure is 200 lb per sq in. The total heating surface is 3,465 sq ft, and the tractive effort at 75 per cent of the boiler pressure is 42,440 lb. The weight of the engine in working order is 106 tons 3 cwt. 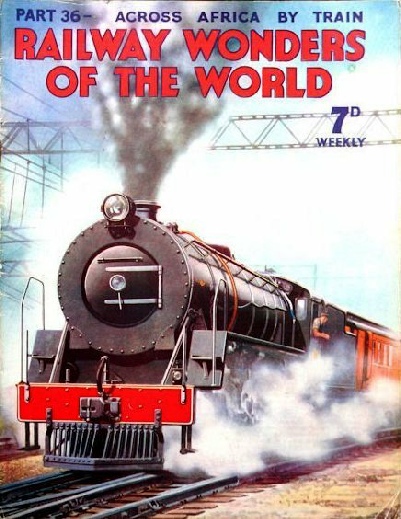 “THE CORNISH RIVIERA EXPRESS drawn by a “King” class locomotive between Dawlish and Teignmouth (Devon). During the summer of 1935 the “Cornish Riviera Express” began to run in two parts daily. The first, called the “Cornish Riviera, Limited” had no publicly booked stop until Truro, a distance of 279¼ miles from Paddington, covered in

5 hours 25 minutes. The normal formation of this Great Western train is 14 coaches, weighing, with passengers and luggage, some 500 tons.

This colour plate was previously used as the cover for part 25.

Across Africa by Rail

Copper, a metal highly necessary to our modern world, has been largely responsible for big railway developments during the last few years in central Africa. A great copper

belt in Africa, stretches from the Katanga region of the Belgian Congo to Northern Rhodesia. In 1929 the Benguela Railway was extended to the border of the Belgian Congo. Two years later the Belgians linked their lines with those of the Benguela railway, so that it is now possible to travel by rail across Africa from Lobito Bay, on the Atlantic side, to the port of Beira on the Indian Ocean side of Africa. This chapter tells the story of the Benguela Railway. Although it is Portuguese-owned, its construction was made possible by British energy and enterprise. Some £12,000,000 have been invested in the line. It was officially opened in 1931.

Comfort is an essential factor in modern transport. As people have become more travel-conscious they have demanded more than speed and safety; the development of the International Sleeping Car Company is the story of the evolution of comfort on the railways. This chapter is concluded in part 37.

ON ELEVATED TRACK. An electric train entering Norrebro from Variose in the direction of Hellerup, on the Copenhagen suburban lines of the Danish State Railways.

One of the most famous stations is not a terminus. Few trains start from it, or end their journeys there. Yet it is one of the world’s busiest stations. Famous trains and famous people pass through it daily. This is Clapham Junction, four miles from Waterloo, and two and three-quarter miles from Victoria. It is a link between the North and South of England, for LMS trains arrive at the junction by the West London Line. The Great Western Railway also has a connexion with it, while to the Southern Railway, to whom this station belongs now, it is of paramount importance. Two of the three main Southern sections pass through; namely the Western Section, formerly the London & South Western Railway, and the Central Section, formerly the London Brighton & South Coast Railway. It is impossible to stand for more than a few minutes on one of the fifteen through platforms at Clapham Junction without seeing an express pass by. The famous “Sunny South Express” from Birmingham, Manchester and Liverpool, bound for Brighton, Eastbourne and Hastings, can also be seen at the junction. This is the fourth article in the series Famous Railway Centres.

An Electric Locomotive on the Midi Railway

AN ELECTRIC LOCOMOTIVE on the Midi Railway of France. This locomotive is fitted with four 350 hp motors, which can be used as generators on down grades, to provide regenerative braking, by returning current to the supply line.

A General View of Clapham Junction

A GENERAL VIEW of Clapham Junction showing, on the extreme left, the Brighton lines, in the centre the West of England main lines, and to the right, the Windsor and Reading tracks. The total area enclosed by its platforms is 24¼ acres. Clapham Junction is the second largest station in Great Britain.

MODERN CARRIAGES owned by the International Sleeping Car Company, and built in 1930. The company was formed in Brussels in 1876. The total rolling-stock of the company at the end of 1934 was 1,134 sleeping cars, 714 dining cars, 19 saloon coaches, 167 Pullman cars, and 157 brake vans.

Across Africa by Rail 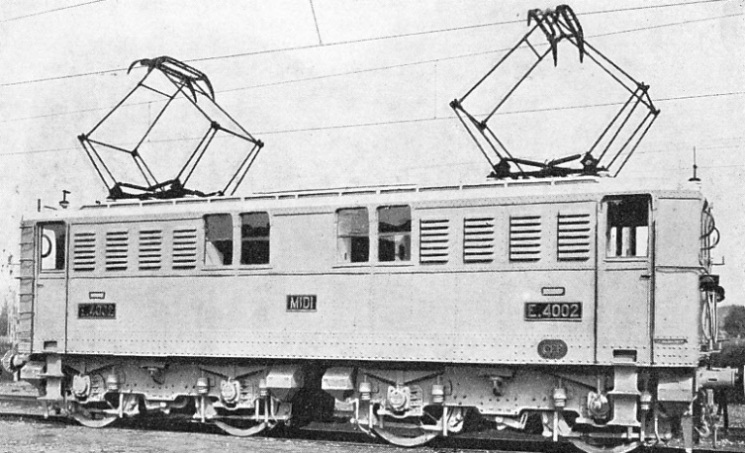 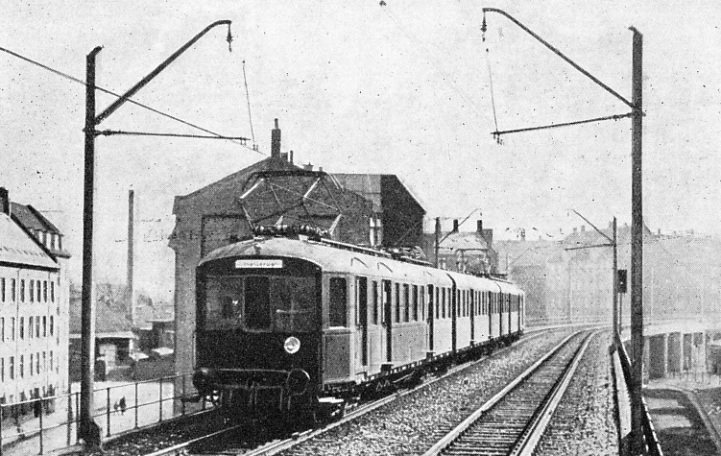 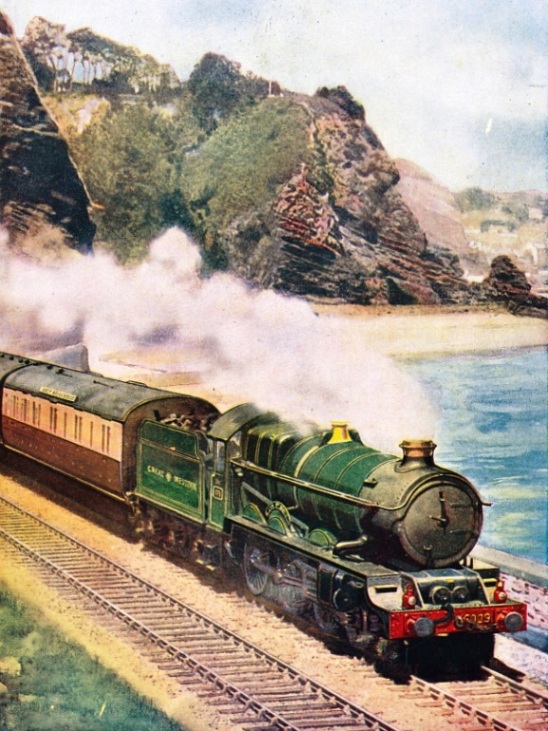 The Pennsylvania Railroad claims to be one of the oldest railways on the American continent. In 1823 a charter authorized the construction of aline from Philadelphia to Columbia, a distance of some eighty miles. That was the humble beginning of a system which to-day extends over 12,000 miles and owns 30,000 miles of track. The company has always been in the forefront of railway progress, and it recently electrified its 224.8 miles main line between New York and Washington throughout. This railway also possesses some of the world’s fastest and most luxurious expresses, such as the celebrated “Broadway Limited”, now accomplishing its New York-Chicago run - 902½ miles - in seventeen hours. This chapter dealing with the past and present  developments of the Pennsylvania Railroad is a vital contribution to the story of the railway in America. 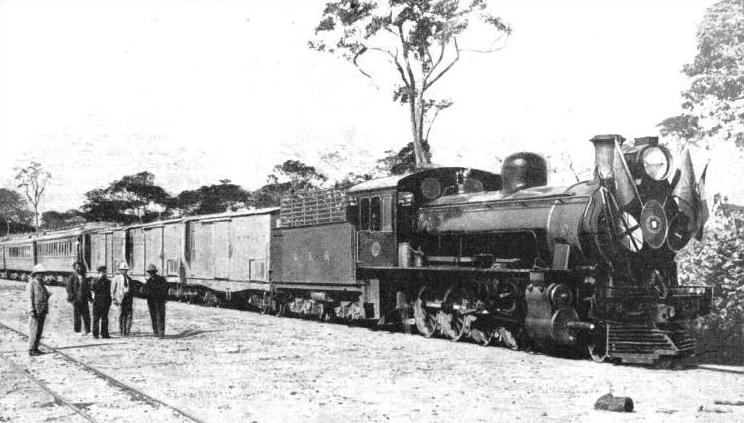 The Official Opening of the Benguela Railway

THE OFFICIAL OPENING CEREMONY of the Benguela Railway took place in 1931, when a special train - seen above - was run over the route. The line, stretching east from the Atlantic Ocean for over 830 miles, took twenty-eight years to build.

An Electric Express train of the Pennsylvania Railroad

AN EXPRESS PASSENGER train of the Pennsylvania Railroad drawn by a modern electric locomotive. This photograph was taken on the main line just west of Philadelphia. The company recently electrified the entire main line between New York, Philadelphia and Washington, a distance of 224.8 miles, which can be covered in 235 minutes. 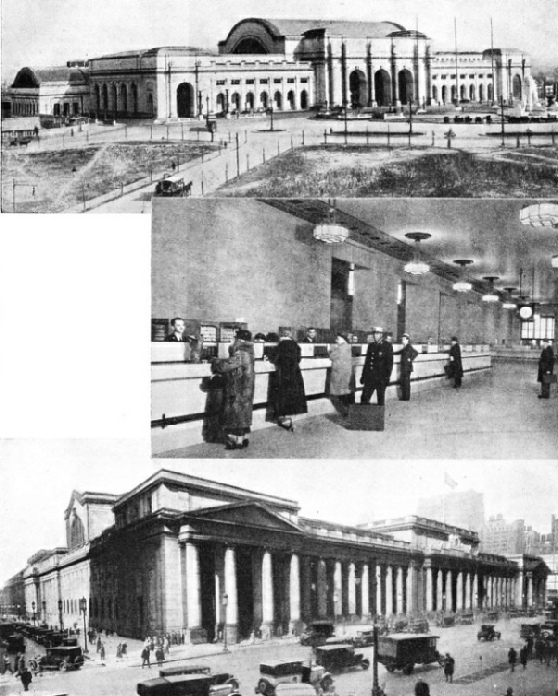 (Top) THE UNION STATION at Washington, which was opened in 1907. It is a terminus on the Pennsylvania Railroad. The approximate cost of the building was some £3,000,000. Constructed of white granite, the station is 620 ft in length and from 65 to 120 ft in height. In the centre is a general waiting room 130 ft wide and 220 ft long. All Pennsylvania Railroad trains between New York and Washington, and Washington and the North and West, are accommodated in this station. To the right is the ticket office of the new Pennsylvania Station at Philadelphia.

(Bottom) IN THE HEART OF NEW YORK. On approaching this terminal the lines of the Pennsylvania Railroad are are carried under the Hudson River into and through the centre of New York City. This big engineering enterprise was completed in 1910. 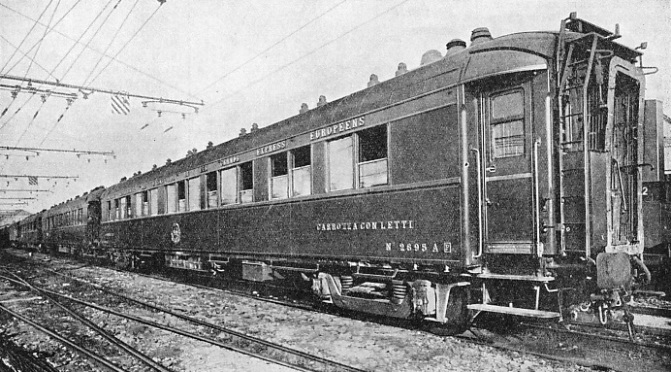 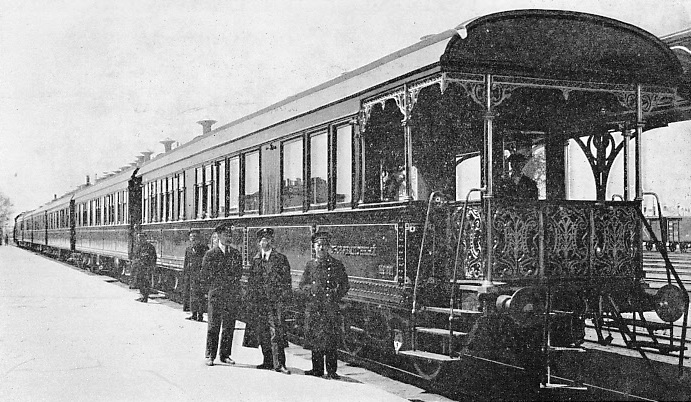 IN THE ORIENT. A luxury train containing sleeping cars at the station of Harbin, in the State of Manchukuo. At Harbin the company possesses repair shops for its rolling-stock.