Part 30 of Railway Wonders of the World was published on Friday 23rd August 1935.

This issue contained a colour plate illustrating Southern Railway No. 850 “Lord Nelson”. The colour plate was attached to page 941, or the fifth page of this number. This plate had previously appeared as the cover to part 24.

The cover design is based on a publicity photograph used by the Romney Hythe & Dymchurch Railway and published as an F. Moore commercial postcard. A copy of the postcard is reproduced below. 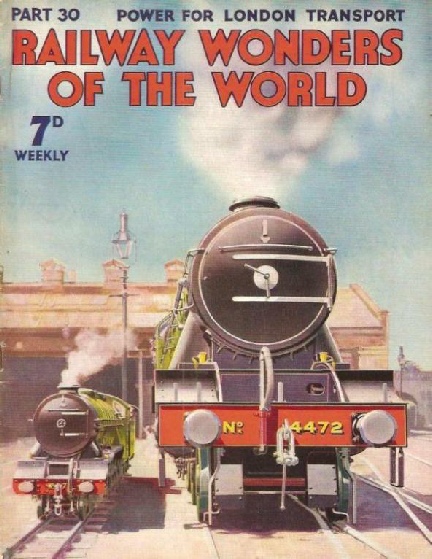 You can read more on LMS steamship services in Shipping Wonders of the World.

AN AVENUE OF STEEL. The Sungei Muda Bridge which carries the railway track across a river in the Unfederated State of Kedah on the north-west coast of British Malaya. The bridge has six spans of 100 ft and one of 250 ft. The photograph, which was taken in 1915, is an impressive view along the single-track deck of the completed bridge over the Muda River.

The Development of Malaya (Part 1)

arrangement is difficult to describe, as the leading axles being fixed and not a bogie, this is not strictly the 4-2-2- type. With their 8 ft driving wheels, these locomotives performed some noteworthy feats of speed. 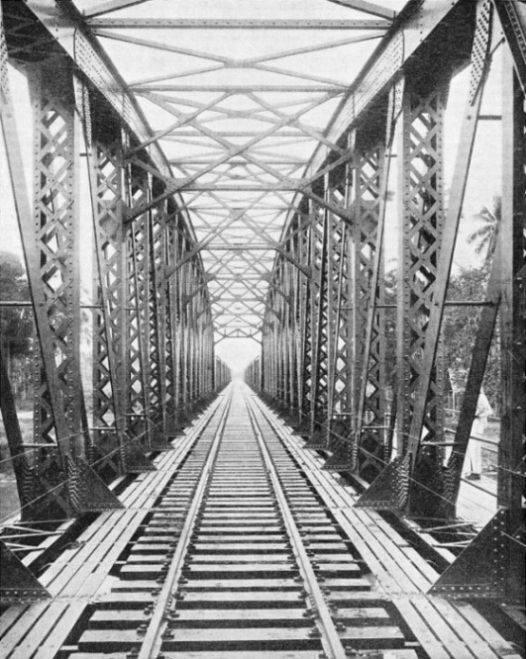 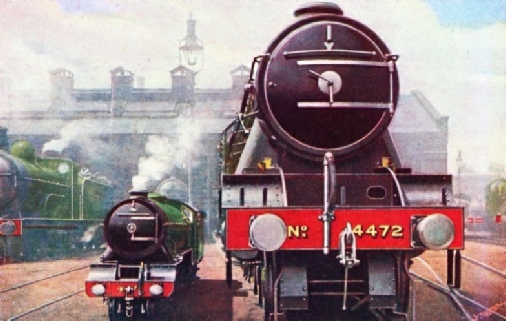 The caption on the postcard reads “ROMNEY, HYTHE AND DYMCHURCH RAILWAY. 15 in. Gauge. The smallest public railway in the world. “TYPHOON” and “FLYING SCOTSMAN” at King’s Cross. 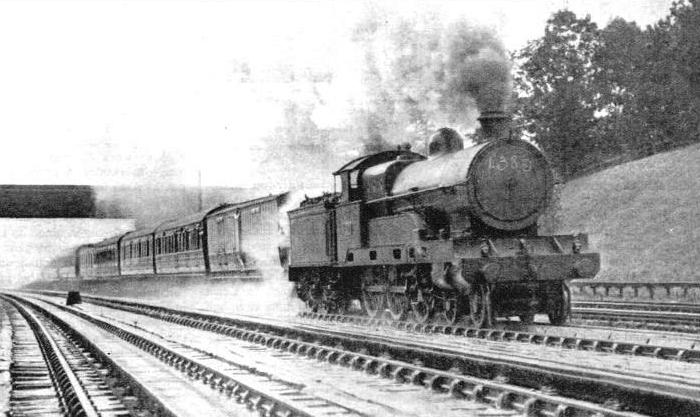 Over the Bushey Troughs

TAKING UP WATER from Bushey troughs, nearly sixteen miles from Euston, on the main line of the Western Division. The former London and North Western Railway was the first to introduce - in 1860 - the water pick-up apparatus. There are eleven sets of water-troughs on the West Coast main line between Euston and Glasgow. The locomotive illustrated is one of the "Claughton" class of the London and North Western Railway. These 4-6-0 engines - most of which have been rebuilt or scrapped since the appearance of "Sir Gilbert Claughton" in 1913 - originally had four simple expansion cylinders, 16 by 26 in and 6 ft 9 in driving wheels;  the total heating surface was 2,127 sq ft, and the grate area 30.5 sq ft. On November 4, 1913, "Ralph Brocklebank" of this class took a train weighing 360 tons from Crewe to Carlisle, 141 miles, in 142½ minutes.

The classification of engines. Before the grouping of the railways in 1923 thee was a multitude of types and classes of locomotives. Since that year there has been a reduction in the number of classes, and a tendency towards standardization. Safety, speed and economy are the governing elements in locomotive design, but different duties and different circumstances many demand drastic alterations in construction. For example, in America the fireboxes of some of the modern engines have been so increased in size that a bogie, instead of a single axle, is needed to carry their weight. It is by the wheel arrangement that we can generally tell whether the engine in question was built for express passenger service or for hauling local or freight trains. 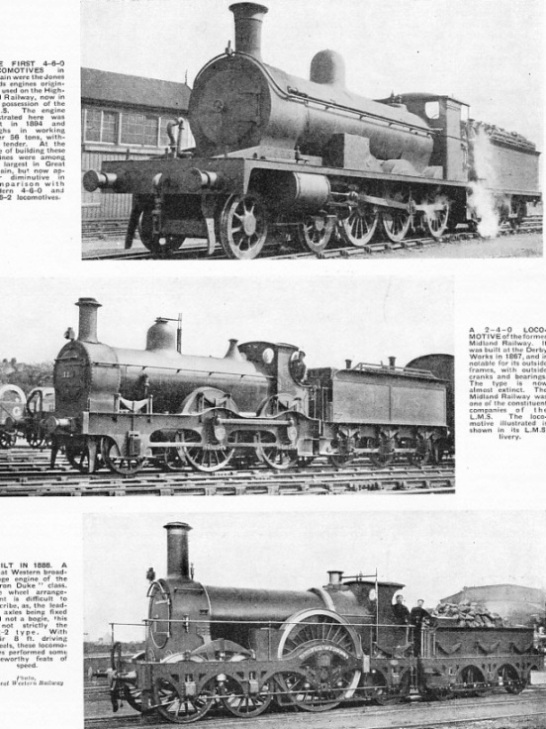 (Top) THE FIRST 4-6-0 LOCOMOTIVES in Britain were the Jones goods engines originally used on the Highland Railway, now in the possession of the LMS. The engine illustrated here was built in 1894 and weighs in working order 56 tons, without tender. At the time of building these engines were among the largest in Great Britain, but now appear diminutive in comparison with modern

(Middle) A 2-4-0 LOCOMOTIVE of the former Midland Railway. It was built at the Derby Works in 1867, and is notable for its outside frames, with outside cranks and bearings. The type is now almost extinct. The Midland Railway was one of the constituent companies of the LMS. The locomotive illustrated is shown in its LMS livery.

(Bottom) BUILT IN 1898. A Great Western broad-gauge engine of the “Iron Duke” class. The wheel 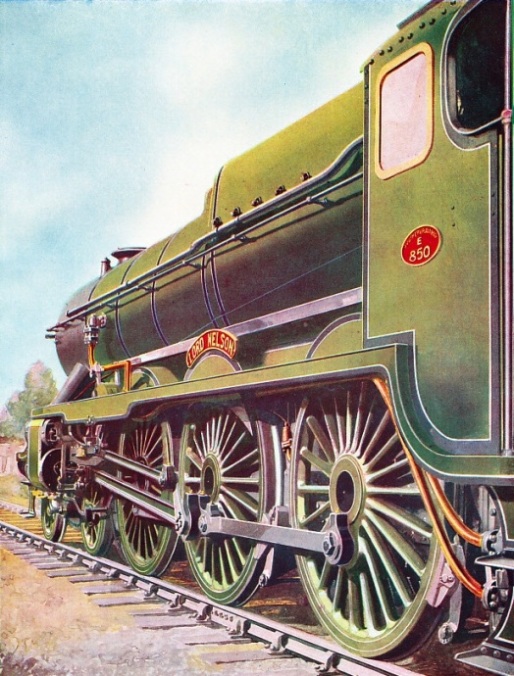 “LORD NELSON”, one of the most powerful locomotives owned by the Southern Railway. The engine has four cylinders, of 16½ in diameter by 26 in stroke. The driving wheels have a diameter of

The colour plate was previously used as the cover for part 24.

Climbing the summit of Mount Rokko San. This famous Japanese pleasure resort lies between the large cities of Osaka and Kobe. One of the most remarkable and longest cable railways in the world runs to the summit of Mount Rokko San. It has a route length of 1 mile 179 yards. The cable line provides a link from a station on the Kobe-Osaka line to the top of the mountain, The uneven slopes of the mountain and great gorges rendered the construction of the line unusually difficult. A large number of tunnels had to be bored through the mountainside. This chapter provides a full description of the track lay-out, the machinery, the braking devices - the average gradient is 1 in 3.5 - and of the methods of operation. 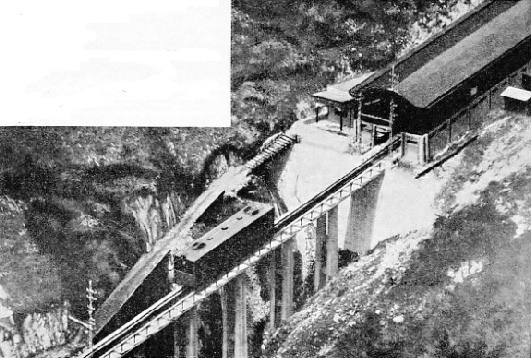 UPPER TERMINUS of the Mount Rokko San Cable Railway. The difference in level between the upper and lower termini is 1,614 ft. The average gradient is 1 in 3½, and the maximum gradient 1 in 2. The laying of the track entailed the boring of tunnels and the erection of concrete viaducts.

A generating station for the supply of electricity. To Londoners, and to those who visit London, the fours chimneys of the power station at Lots Road, Chelsea, are one of the prominent landmarks in West London. But not everyone realizes how vital this great power station is. It supplies electric current to the District Railway and its allied lines, the East London Railway, the Whitechapel and Bow Railway, to certain sections of the Southern Railway, and to the London United Tramways. Practically all the work at Lots Road is done mechanically; men are merely the controllers of the vast plant. Stoking, for instance, is accomplished by a revolving chain-grate stoker, which takes the coal through the furnace at the speed required for perfect combustion. 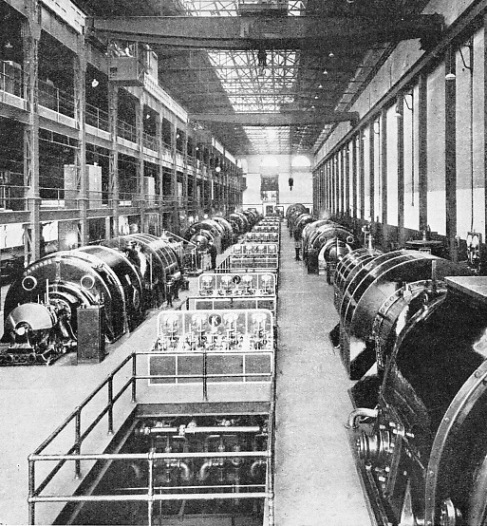 A GENERAL VIEW of the Generator Room at Lots Road Power Station. The maximum load of the power station is just over 100,000 kilowatts, or the equivalent of 134,000 horse-power.

The Development of Malaya (Part 1)

A line that brought prosperity to the jungle. The story of the system that serves the Federated Malay States, the Straits Settlements, and the Unfederated States of Johore, Kelantan, Kedah, and Perlis, which are under British protection. The first section in this territory, constructed from Taiping to Port Weld, was completed in 1885. To-day Singapore and Bangkok, the capital of Siam, are linked by rail, the Siamese lines being reached at Sungei Golok and Padang Besar; an express service with sleeping coaches and dining cars is run twice weekly between Penang and Bangkok. The Federal Railway Administration possesses 946 miles of track of one-metre gauge. There are also 121 miles of track in the Johore State leased to the Federal Railway. This is the tenth article in the series Railways of the Empire. The article concludes in part 31.