Part 31 of Railway Wonders of the World was published on Friday 30th August 1935.

This issue contained a black and white art plate illustrating the Gamperi Viaduct in the Semmering Valley, Austria. The plate was attached to page 973, or the fifth page of this number.

"Our cover this week shows a LMS train drawn by a Midland compound engine making its way through the splendid scenery near Chee Tor, Derbyshire. Each of the compounds numbered 1000-1044 has 7 ft driving wheels, one high-pressure cylinder 19 in by 26 in between the frames, and two low-pressure cylinders (outside) 21 in by 26 in. Later engines of this class have driving wheels of 6 ft 9 in diameter. There are now 235 Midland compounds on the LMS.” 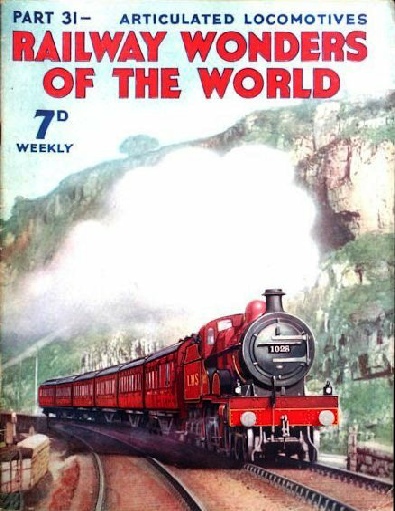 In the Semmering Valley

IN THE SEMMERING VALLEY, AUSTRIA. A goods train crossing the curved Gamperi Viaduct. It is near Semmering that the line begins to ascend the famous Semmering Pass. Between Murzzuschlag and Gloggnitz - 47 miles from Vienna - the line rises over 700 ft. In eleven miles. The railway, which was one of the first Continental mountain lines, was built in 1848-1854.

The Development of Malaya (Part 2)

The continuous increase of traffic on the railways all over the world has meant that the size and power of engines - which now have often to haul trains of over 500 tons at considerable speeds - have also increased. But there are limits to engine development. Maximum axle loads, loading gauges, and the type of rail laid, have checked the efforts of the railway engineer. In many countries the maximum cross-sectional  dimensions have been reached. The only development to gain more power has, therefore, become in many instances, an increase in length. This, provided the longer engine can be made sufficiently flexible to traverse curves, also reduces the concentration of weight on the track. That locomotive designers have overcome these difficulties is a striking testimony to their skill and ingenuity. They evolved the articulated locomotive,the principle of which is to have two independent chassis, each with its own cylinders and motion, and carried on pivots. These pivots form part of the frame carrying the boiler, large enough to supply steam to both sets of cylinders. The “Fairlie” engines employed on a narrow-gauge line in North Wales were among the first of this remarkable type to be used in Britain. Later and more powerful  types of articulated engines are the well-known “Mallets” and “Beyer-Garratts”. The latter was patented in 1907, and the first “Beyer-Garratt” was built in 1909 and weighed 33½ tons. A recently constructed “Garratt” weighs 234 tons.

(Top) A RUSSIAN GAUGE LOCOMOTIVE which has the 2-6-2 wheel arrangement. Engines employed in Latvia are of British, German, Russian and Latvian manufacture. To-day there are about 300 locomotives of various types in operation. The 2-6-0 wheel arrangement is particularly favoured, and probably finds more general employment than any other class of engine.

(Middle) RECENT RAILWAY DEVELOPMENTS such as the rail-car have been introduced on the lines of the Latvian State Railways. The rail-car illustrated in the centre picture was constructed in Latvia and is employed for light passenger work on local services. At present there are two of these vehicles in regular operation.

(Bottom) A 2 ft 5½ in gauge passenger locomotive adapted for burning wood fuel, at  the head of a local train. There are 270 miles of

2 ft 5½ in track laid in Latvia. Coal, much of which is imported from Great Britain, is now being used  more extensively.

The Development of Malaya (Part 2)

In the Semmering Valley (art plate)

The State Lines of Latvia (Part 1)

BATU ARANG STATION, on a branch tine between Kuala Lumpur and Penang, lies some twenty-two miles from Kuala Lumpur. Kuang Junction is at the head of this fourteen-miles branch line leading to Batang Berjuntai, the terminus.

The railways of Austria form a stage on the route of through traffic between northern and southern Europe. Many important expresses pas through Austria; they included the “Orient Express”, the “Ostend-Vienna-Orient Express”, and the “Arlberg-Orient Express”. The route of the “Arlberg-Orient Express” train is one of the most picturesque in Europe. Austria also claims to have possessed the first railway on the Continent. In 1824 the Emperor gave permission for a line, the first section of which was opened in 1827. In those early days horse and bullock traction was used. Affairs in Austria have frequently conspired against railway developments, but, in spite of this, considerable progress has been made. Since 1923, after the grouping of the Austrian Federal Railways, four important lines have been electrified. At present there are some 570 route miles of track, mostly main line, which are electrified. 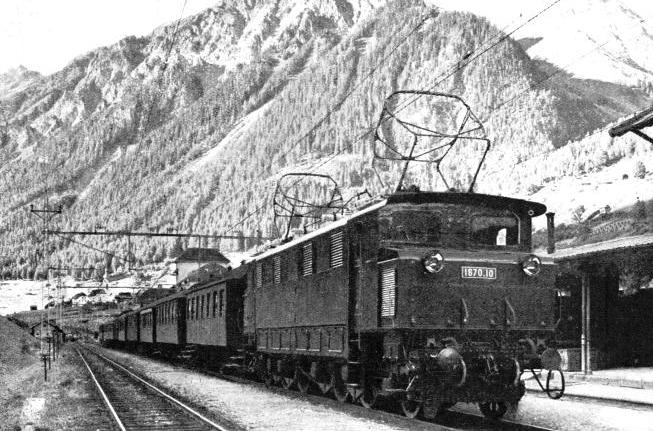 AN ELECTRIC EXPRESS LOCOMOTIVE on the Austrian Federal lines. The engine, 1670 class, has independent axle drive, and the wheel arrangement is 2-8-2. The railway uses single-phase alternating current of 16 cycles, 15,000 volts at the contact line. There are at present 215 electric locomotives in operation on the Austrian Federal Railways. 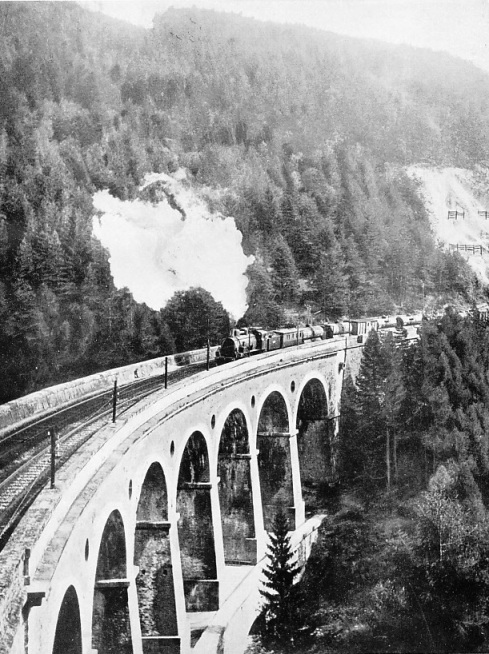 Outstanding achievements in the South Island. The South Island of New Zealand has the longest railway tunnel in the British Empire - the Otira Tunnel, five and a quarter miles in length. This chapter forms a sequel to the one is parts 8 and 9. This is the eleventh article in the series Railways of the Empire.

A Locomotive of the Future

LOCOMOTIVE OF THE FUTURE. A drawing of a huge freight engine of the 2-6-6-2 + 2-6-6-2 type, for which a patent has been taken out by Messrs Beyer, Peacock & Co Ltd, of Manchester. The engine is of the “Mallett-Garratt” or “Super-Garratt” class, and has been designed to haul the heaviest goods traffic.

BUILT IN GERMANY. This “Union-Garratt” articulated locomotive was supplied by Messrs Maffei, Munich, to the South African Railways in 1927. Special features, in contrast with the “Beyer-Garratt”, are the extended girder frames which unite the coal bunker and rear tank with the boiler, and the extra well tank in front of which the man is standing. The total length of the locomotive is 74 ft 8 in, and the service weight is 164 tons 16 cwt. The diameter of the driving wheels is 4 ft, and the boiler pressure 180 lb per sq in. This engine is of the 2-6-2 + 2-6-2 type. The gauge is 3 ft 6 in. Tractive effort is 75 per cent of the boiler pressure is 50,050 lb. The cylinders measure 18½ in by 26 in.

The State Lines of Latvia (Part 1)

The railways of the Latvian Republic are indicative of the changes on the map of Europe since 1918. The first line was opened in Latvia in 1860 when that State was a Russian province. To-day the railways are in an unusual positron; there are five different gauges, ranging from

2 ft to 5 ft, while the locomotives are of British, German, Russian, and Latvian manufacture. The lines already constructed or reconstructed are described, and the main characteristics of the State railways outlined. The article concludes in part 32. 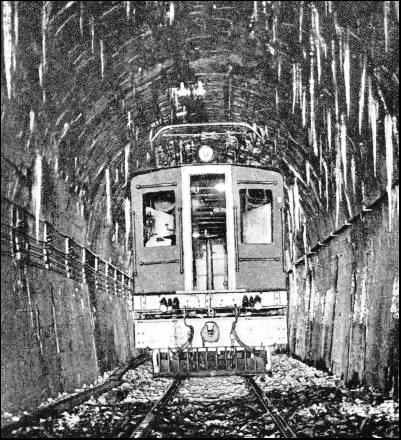 Inside the Otira Tunnel, New Zealand

THE LONGEST RAILWAY TUNNEL in the British Empire is the Otira Tunnel in the South Island of New Zealand. This tunnel is about five and a quarter miles long and is 17 ft high and 15 ft wide. The tunnel is dead straight, but the single tine through it has a gradient of 1 in 33. Because of ventilation difficulties the track through the tunnel has been electrified. 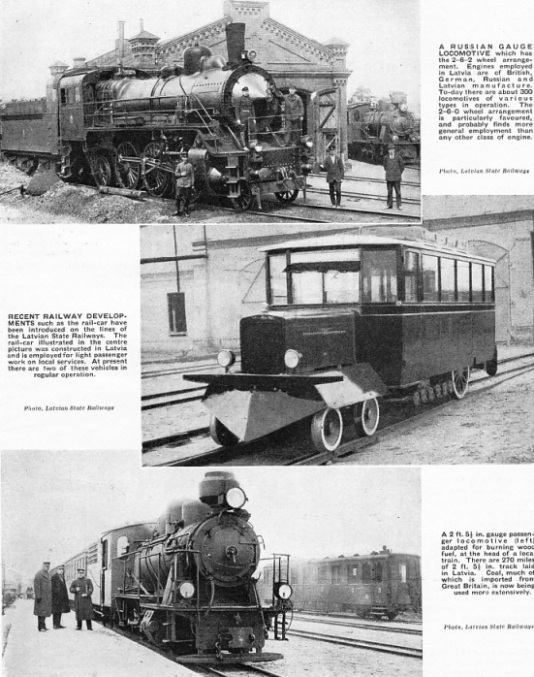