Part 39 of Railway Wonders of the World was published on Friday 25th October 1935.

This issue contained a colour plate of Royal Scot class “Highland Light Infantry”. The colour plate was attached to page 1229. This plate had previously appeared as the

This week’s cover depicts the famous British express train the “Scarborough Flier”, starting on its journey. It is headed by the LNER pacific engine “Coronach”, which is in the same class as the famous “Flying Scotsman” locomotive. The train covers the journey between King’s Cross and York, a distance of 188.2 miles, in exactly three hours, in either direction.

“Coronach” had previously appeared as an illustration in the article on Solving the Smoke Problem in part 15.

The editorial to this issue announced that another eleven numbers would be issued, “bearing in mind the demand for an extension from so many enthusiasts. 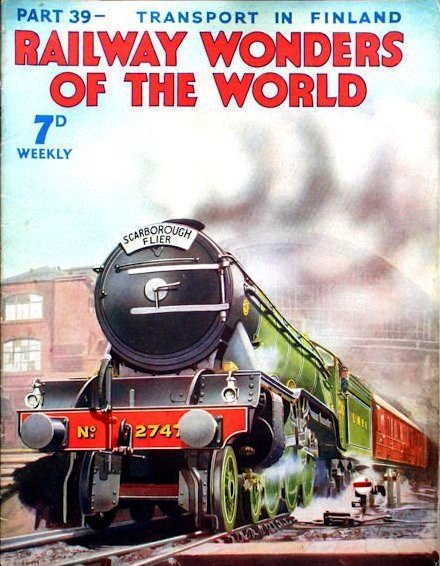 Concluded from part 38. A chapter on Rolling Stock Construction appears in part 48 and another on The Railway Carriage appeared in part 16.

EXPRESS PASSENGER LOCOMOTIVE of the “Royal Scot” 4-6-0 class belonging to the LMS Railway. Its name is “H.L.I.”, The initials standing for “Highland Light Infantry”. Over seventy “Royal Scots” are in service. The first fifty were built in 1927 by the North British Locomotive Co. Ltd, of Glasgow. Twenty more were built at the Derby Works of the LMS. In 1935 a “Royal Scot” was turned out from Crewe. Principal dimensions are: three cylinders, 18 by 26 in; coupled wheels,

TEN-COUPLED TANK LOCOMOTIVE, Class O 1, of the Finnish State Railways, designed for heavy shunting and local goods traffic. The engines in this class weigh, approximately, 78 tons in working order, and were built to haul loads of 900 tons.

One of the most remarkable features of modern railway operation is the preservation of rails near big termini where hundreds of trains, both steam and electric, representing many thousand tons every twenty-four hours, pass over the crossings. To-day, instead of repeated replacements of worn crossings, a portable welding apparatus is brought to the site, and new alloy steel is built on to the worn sections. Welding plays an increasingly important role in railway work. Apart from its use on the track, welding is extensively employed in bridge construction and in the building of rolling stock. It dispenses with riveting and reduces weight. Many of the latest American “flyers” have had their weight diminished one-third by the introduction of welding. This chapter reveals the remarkable uses to which this modern process has been put. Germany, for instance, possesses a tunnel on the Berlin-Stuttgart line in which the rails of the double track have been welded into four continuous lengths, each 8,662 ft long.

When several companies were grouped together in 1923 to form the London, Midland and Scottish Railway, the Midland alone of that group retained its title. The Midland Railway had a route mileage of 1,529 miles in 1921 and provided a direct link between nearly all the biggest cities in Britain. It offered an amazing number of alternative routes and had many important expresses on its lines, including the existing “Yorkshireman”. This chapter shows the striking influence this great system has had on the rail transport of Great Britain. You can read more on the Midland Railway in Frederick Talbot’s Railway Wonders of the World (1913).

THE CENTRAL STATION AT MONTEVIDEO, owned by the Central Uruguay Railway, is one of the finest stations in South America. It was built in 1878, cost £140,265, and covers an area of some 15,250 sq yds. Montevideo is the most important railway centre in Uruguay.

Welding on the Sharnbrook Viaduct

22,000 FT OF WELDING - a two years’ task - carried out on the reconstruction of the Sharnbrook Viaduct, provides a good example of the importance of welding in the service of the railway. The recently strengthened viaduct carries the tracks of the LMS main line between St Pancras and the north over the River Ouse, a quarter of a mile south of Sharnbrook Station, Bedfordshire.

The Trains of Uruguay (Part 1)

A Drawing Room on Wheels

A DRAWING ROOM ON WHEELS is the effect of this handsomely furnished observation lounge on the rear of the Baltimore and Ohio Railroad’s new streamlined express, the “Abraham Lincoln”, operating between Chicago and St Louis. The express covers the 284 miles run in 5½ hours. The company, controlling some 5,550 miles, owns about 1,680 passenger coaches.

Among the most fascinating of Great Britain's comparatively little-known light railways is the Festiniog railway. This Welsh system was opened in 1836, and claims to have been one of the first narrow-gauge lines in the world. It links the towns of Festiniog and Portmadoc in North Wales. The line was constructed primarily for the purpose of conveying slate for export. This chapter gives a brief summary of the story behind this unique line, on which there are no platforms at the stations, and where passengers are locked inside the carriages. Many interesting locomotives, including the articulated “Fairlies”, have worked on this line, and these are also described. You can read more on the “Fairlie” engines in Frederick Talbot’s Railway Wonders of the World (1913). 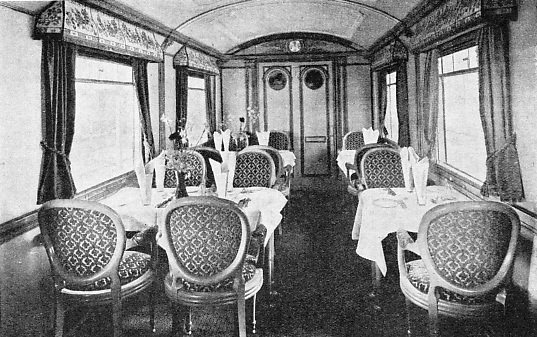 A Restaurant Car on the “Flying Scotsman”

THE “FLYING SCOTSMAN” includes superb restaurant cars in its make-up. Triple articulated restaurant car sets measuring 151 ft and weighing when complete, over 80 tons, are used on the British express. 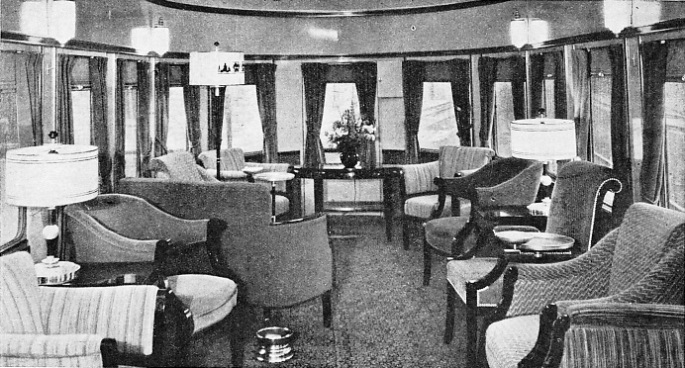 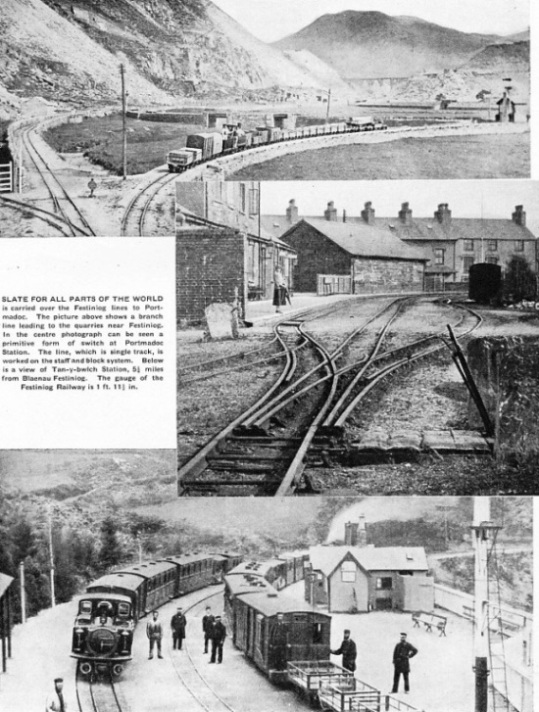 SLATE FOR ALL PARTS OF THE WORLD is carried over the Festiniog lines to Portmadoc. The top picture shows a branch line leading to the quarries near Festiniog. In the centre photograph can be seen a primitive from of switch at Portmadoc Station. The line, which is single track, is worked on the staff and block system. At the bottom is a view of Tan-y-bwlch Station, 5¼ miles from Blaenau Festiniog. The gauge of the Festiniog Railway is 1 ft 11½ in. 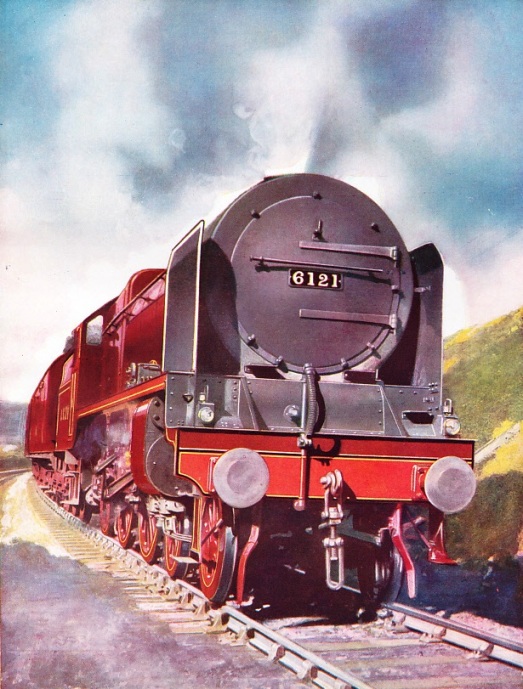 A Freight Train Near Duffield, Derbyshire

AN 0-6-0 LOCOMOTIVE formerly owned by the Midland Railway hauling an LMS freight train near Duffield, Derbyshire, on the line from Derby to Manchester. The Midland used 0-6-0 engines almost exclusively for its freight services. This class is conspicuous for its outside bearings.

It is problematical whether streamlined suburban trains will ever come into vogue in Britain, but in America, the New York, New Haven and Hartford Railroad have built a Diesel-electric streamlined train for service in New England on a short route with heavy traffic. The “Comet” attained a speed of 110½ mile an hour on a test run, while between New Haven and Boston the train beat the best timing of steam-hauled expresses by fifty-five minutes. This chapter describes the details of this outstanding train, which lends support to the arguments of those who maintain that the future of high-speed train travel depends upon the development of Diesel-electric traction. This is the eleventh article in the series on Famous Trains. 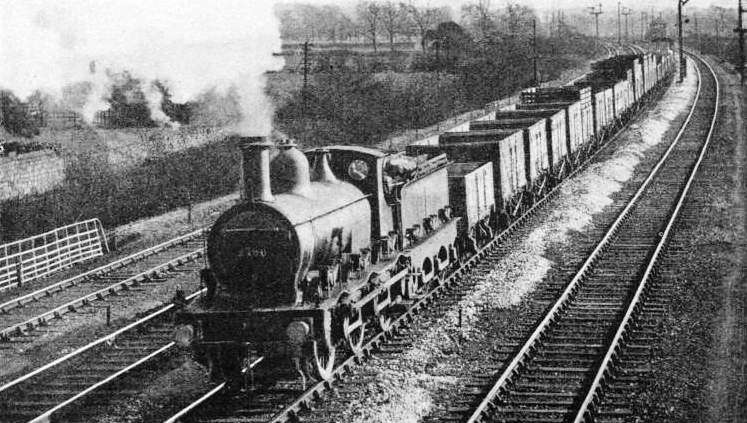 110½ MILES AN HOUR was achieved by the “Comet” on its test run. This streamlined express was built for the New York, New Haven and Hartford Railroad by the Goodyear-Zeppelin Corporation at a cost of £50.000, and the design was submitted to various aeronautical tests. The train was constructed for service between Boston and Providence, Rhode Island, and scheduled to cover the 43.8 miles in 44 minutes.

Finland owns to-day a highly efficient railway system. The State Railways alone control some 3,400 miles. The pioneer line in Finland was completed between the capital, Helsinki, and Travastehus (Hameenlinna) in 1862. A through line to Russia - to St Petersburg, now Leningrad - was opened in 1870. To-day, the Finnish railway joins the Russian system at Rajajoki, and as the gauges are the same, namely 5 ft., through trains can be run. Finland has also a connexion with the Swedish State Lines at Tornio, although no through running is possible in this instance as the gauges differ. 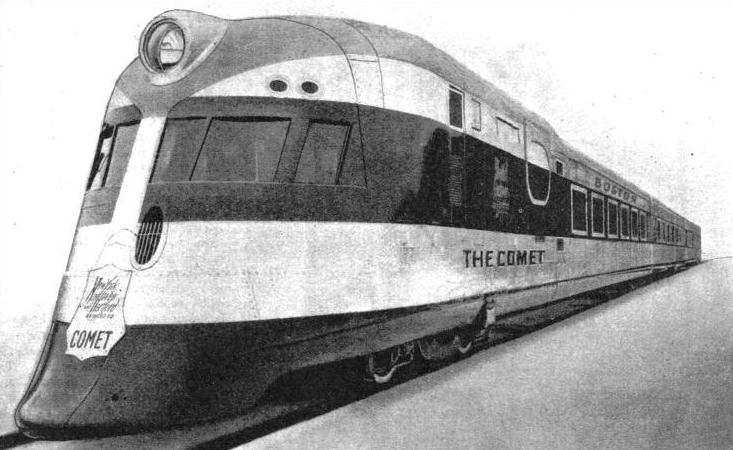 A Wood-Burning Engine of the Finnish State Railways

WOOD-BURNING ENGINES form a large proportion of the locomotives owned by the Finnish State railways. The 2-6-0 engine above is one of the Class K5 built at Tampere in 1928. Wood-burners are used on local and up-country lines. 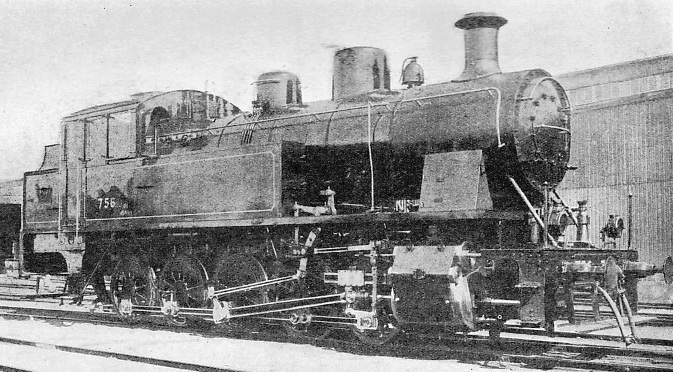 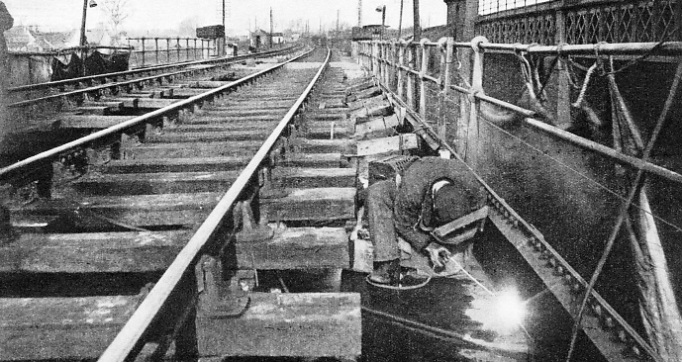 SEVERE FLOODS have presented the railway engineers in Uruguay with some difficult problems. This photograph shows a “wash-out” on the lines of the Uruguay central early in 1914. In the background is a steel viaduct under construction. 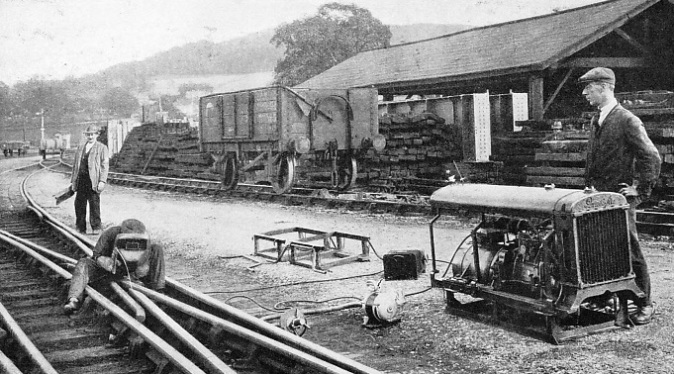 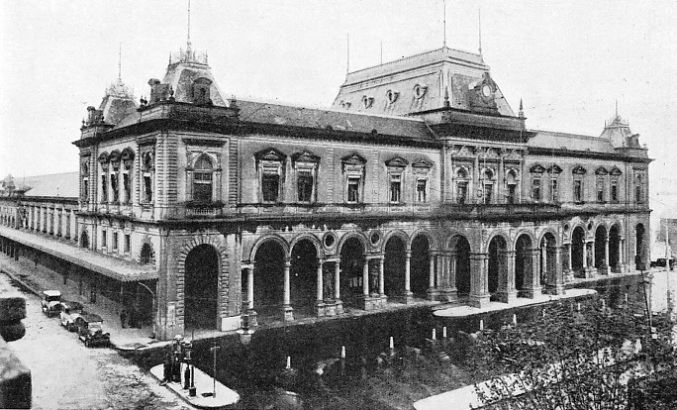 A Quasi-Arc Plant in Operation

A QUASI-ARC PLANT in operation near Bathampton, Somerset. These plants can be easily transported. The welding depends upon the intense heat of the electric arc - about 3,500 degrees centigrade - which causes the simultaneous fusing of a portion of the rail and of a flux-covered wire rod, or “electrode”. The operator is engaged in building up the worn nose of a crossing.

The Trains of Uruguay (Part 1)

The development of rail transport in this republic was due largely to British enterprise; of the 1,746 miles of standard gauge track in the country, 1.486 are owned by British companies. This chapter is concluded in part 40.