Part 38 of Railway Wonders of the World was published on Friday 18th October 1935.

This issue contained a photogravure supplement on the construction of the Sydney Harbour Bridge. This formed part of an article of the same title, and appeared on pages 1195-1208.

The cover this week shows a powerful Canadian Pacific express locomotive. The chief dimensions of this engine, type 3100, are: cylinders, 25½ in by 30 in; driving wheels, 6 ft 3 in in diameter; tractive effort, 60,800 lb; and boiler pressure 275 lb. 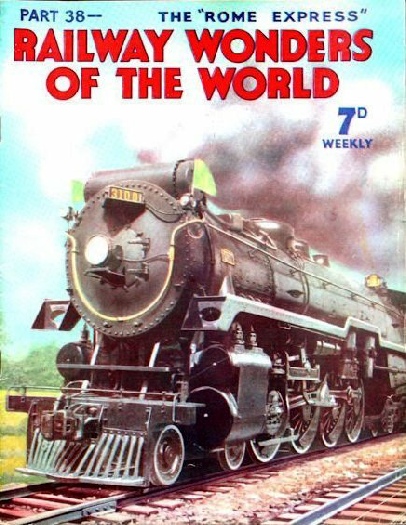 Concluded from part 37. This article was written by Cecil J. Allen.

One of the world’s most romantic trains is the “Rome Express”. It leaves the Gare de Lyon, Paris, on a daily journey to Rome, a distance of 899 miles, which is completed in just over twenty-one hours. The route of this famous express, which began regular operation in 1897, is as fascinating and as picturesque as any. The train is hauled alternately by steam and electricity. In Genoa, a centre for international trains, the traveller sees coaches belonging to the Swiss Federal, German State, and Netherlands Railways, all on one train. This is the tenth article in the series Famous Trains.

THE “SUNNY SOUTH EXPRESS”, shortly after leaving Willesden Junction in the days before the grouping of the railways in 1923, hauled by one of the London, Brighton and South Coast

4-4-2 tank engines. The coaches are in the former LNWR colours - “purple-brown and spilt milk”. The Brighton, Eastbourne and Hastings section of the present-day express from the North calls at Willesden Junction and reaches the Southern Railway via the West London and West London Extension Lines and Clapham Junction. The other section also calls at Willesden, but branches off from the West London Extension Line at Battersea for Chatham and the Kent Coast.

Big railway bridges symbolize man’s conquest of natural barriers to his progress. They also emphasize his unity and co-operation. The British Empire, as we have seen, contains many of these engineering marvels which have made possible the world’s great transcontinental routes. One of the most spectacular Empire bridges is in Australia - the Sydney Harbour Bridge, opened in 1932. This giant steel structure, with its approaches, is 2¾ miles long, and cost, in all, £10,000,000 to construct. The huge main arch has a span of 1,650 ft, and the largest liners can pass under the bridge into a harbour which, incidentally, affords anchorage sufficient to hold the entire British Navy. As the bridge joins the northern suburbs with the city and unites lines north of Sydney with those serving the southern suburbs, its importance as a railway link is obvious. Over 50,000 tons of steel were used in the construction of the bridge, and most of the metal was shipped to Sydney from Middlesbrough, Yorkshire, a journey of nearly twelve thousand miles. The central photogravure supplement forms part of the article. This is the third article in the series Marvels of Engineering.

You can read more on the Sydney Harbour Bridge in Wonders of World Engineering.

BUILT FOR PUBLICITY, this giant 4-8-4 locomotive was constructed to the order of the Timken Co, to demonstrate the practicability of roller bearings for all engines and tender wheels, driving wheels included. The engine has since been purchased by the Northern Pacific Railroad for service through the Rockies. It has 27 in by 30 in cylinders, 6 ft 1 in driving wheels, 250 lb pressure, and a total heating surface of 7,277 sq ft.

TOWERING SKYWARDS, the two halves of the great arch grew out from the shores of Sydney Harbour as the creeper cranes added girder to girder. On both sides of the northern approach spans (on the right) can be seen the steel cables holding back the half-arch under construction - a load of about 14,000 tons. Each of the steel ropes was subjected to a tension of 108 tons. The lower chords on the southern half of the arch, across the harbour, may be seen resting on a pair of bearings in front of the distant pylon.

THE “ROME EXPRESS” is hauled over the line between Modane and Leghorn, a distance of 274 miles, by an Italian electric locomotive of this type. The locomotive is put on at Modane and hauls the express through the Mont Cenis Tunnel.

To the average traveller on the railway, especially when undertaking a long journey, one of the most important considerations is a comfortable seat. To-day, expresses in this country are luxuriously appointed. Many problems confront the builder of rolling-stock; increased spaciousness and comfort, for example, inevitably mean extra weight and a lower passenger capacity. The construction of modern rolling-stock has become almost an art, and there are, indeed, few things more pleasant to contemplate than the long, graceful, well-proportioned lines of an up-to-date coach. The article concludes in part 39.

A chapter on Rolling Stock Construction appears in part 48 and another on The Railway Carriage appeared in part 16.

A SEVENTY-WAGONS FREIGHT TRAIN on the Southern Pacific Railroad being hauled by one of the large oil-fired 4-8-0+0-8-4 articulated engines of the “4100” class, which have the cab and the firebox at the leading end, and the chimney and the tender in the rear. There is no difficulty in making this arrangement with oil-fired engines. These locomotives, with four cylinders each measuring 24 by 32 in are employed on either passenger or freight service. The look-out ahead is unimpeded.

Willesden Junction is situated 5½ miles from Euston and occupies a position unique in the British railway system. It combines an important main line station, with a place of transfer for goods and passenger traffic between the main lines north and south of the Thames, is a busy station for suburban traffic, a clearing house for freight from London Docks, and also a large railway and freight depot. This is the fifth article in the series Famous Railway Centres.

THE IMPORTANT POSITION at Willesden Junction is largely due to the fact that it is the meeting place of lines from the north and west of London. The first station, half a mile to the north of the present building, was opened in 1844. To-day Willesden Junction, 5½ miles from Euston, has low-level and high-level platforms. The Low-Level Station deals almost exclusively with main-line traffic, and the High-Level with suburban traffic. There is also a New Station, for electric trains between Watford and Euston, Broad Street, and the Bakerloo Tube. 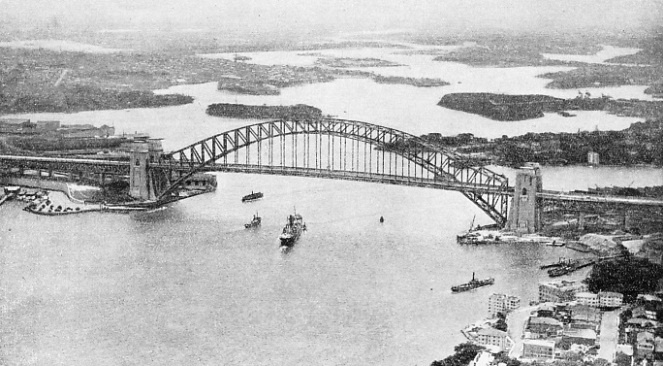 CROSSING SYDNEY HARBOUR in a single span of 1,650 ft between the centres of the hinges, at a clear height of 170 ft above the water, this bridge carries rails, road, and footways, the total width being 160 ft. The arch span, which rises to a height of 440 ft, is flanked by massive masonry pylons, with five steel approach spans on either side of the harbour. The contract was let in March, 1924, the two halves of the main span met in August, 1930, and the bridge opened to traffic in March, 1932. 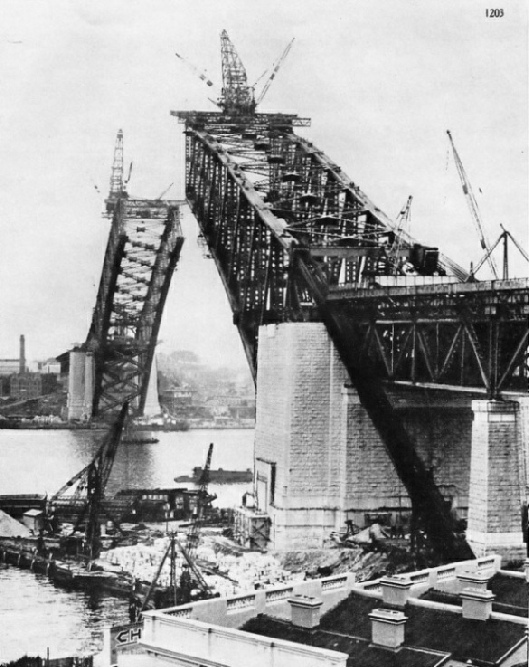 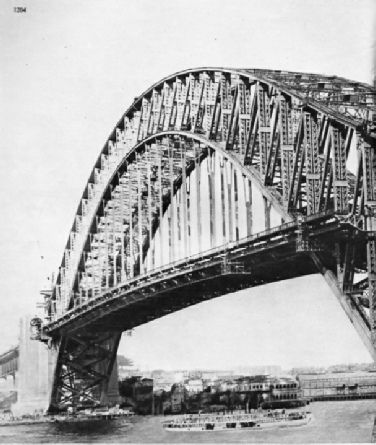 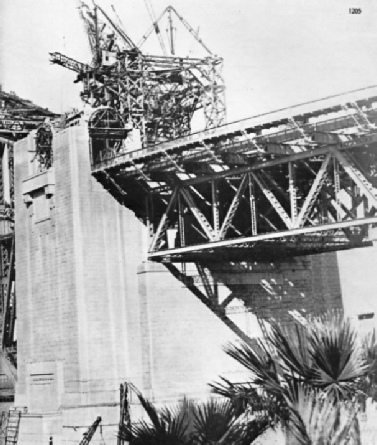 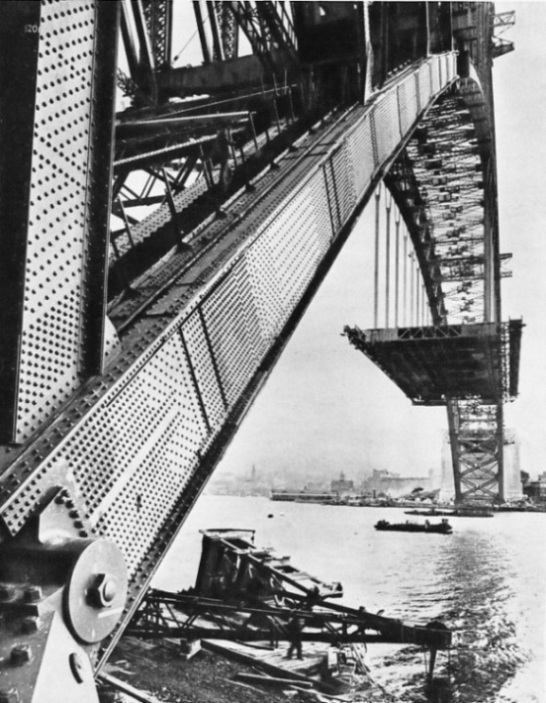 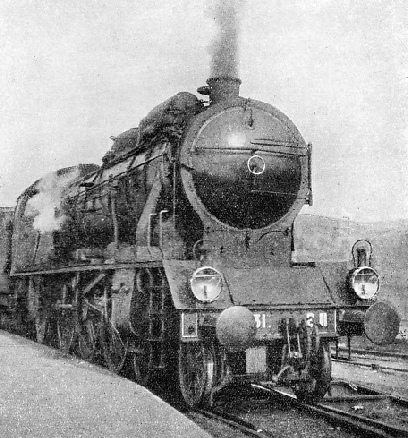 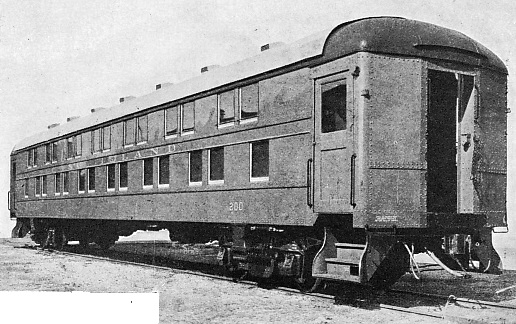 STEEL AND STONE. The mighty arch spans Sydney Harbour form North to South, carrying four lines of railway track, a fine wide road and footways for the thousands of people that cross the harbour of the cpaital city of New South Wales. The North Pylon on the right is seen built up to the deck level of the brdige, and the creeper cranes used in the construction of the arch are in course of demolition. With their twin towers the completed pylons rise to 285 ft above water level. Across the water, a distance of 1,650 ft, are the southern bearings of the arch, situated at the foot of the South Pylon. The height of the great arch above water level is 440 ft.

Thrusting Earthwards From the Sky

THRUSTING EARTHWARDS from the sky the gigantic lower chords of the arch rest on immense hinge-like bearings on both shores of the harbour. As the arch expands under the action of the sun’s heat, the bearings allow it to swing slightly upwards. Each steel bearing weights 300 tons, and the end posts, meeting the lower chords above the bearings, are about 190 ft high. At the stage of construction shown above, the creeper cranes have started their return journey down the arch, and the central portion of the deck can be seen suspended from the lower chords by steel hangars.

LEAVING PARIS. The “Rome Express”, headed by a “Pacific” locomotive. The train departs from the Gare de Lyon at 8.20 pm. The first stop is at Laroche, ninety-six miles distant.

A DOUBLE-DECK COACH. The seats of the lower tiers have their floors fourteen inches below the centre gangway, and are reached by steps down. The seats of the upper tiers are placed above them and are reached by steps up. The coach was built at the Altoona Shops of the Pennsylvania Railroad, for operation on the Long Island Railroad between Pennsylvania Station, New York City, and suburban stations on Long Island. To ensure maximum comfort both in summer and winter, a special system of insulation has been installed, together with exhaust ventilators and a double roof; the roof provides free circulation of air between its two surfaces. Between the inner and outer walls of the car is insulating material. Heating and lighting are electrical.