AT the end of each long journey, a tender engine requires to be turned round in order that its chimney may be in front for the trip back home again. Here you see one of the big London and North Eastern “Pacifics” on a 70-foot turntable, as nothing shorter will accommodate an engine and tender of such a length. Indeed, at one or two points on the London and North Eastern system, such as York, these engines have to run round a triangle of lines in order to get turned round, the present turntables there not being long enough to turn them. So well is a modern turntable built and balanced that the one shown can be easily moved round, with its 150-ton burden, by the driver and fireman between them. At places where there are many engines to be turned, the table is usually worked by hydraulic or other power, in order to save the labour and time of turning by hand. “Tank” engines, which work the short-distance trains, and so need no separate tenders in which to carry their supplies of coal and water, usually make their return trips with the coal-bunker leading, and the chimney at the rear. Thus the time and trouble of turning them round at the end of each journey is saved. 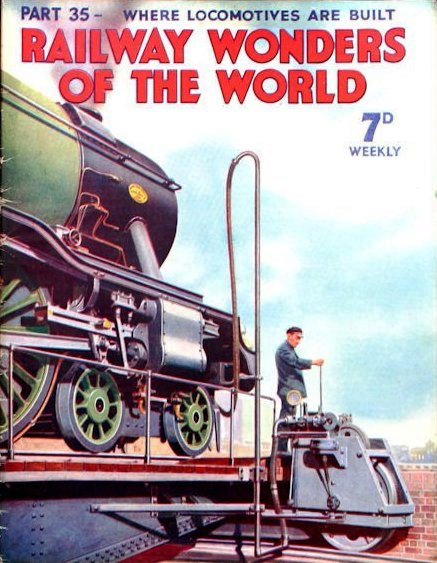 THE COVER OF part 35 shows a turntable worked by the brake apparatus of a locomotive. The appliance consists of a small vacuum engine with two double-acting oscillating cylinders geared to a tractor fixed to the turn-table itself. When an engine is run on the turntable, the driver connects the vacuum brake pipe of his locomotive to a corresponding pipe on the tractor, and applies the vacuum ejector apparatus. This suction through the brake pipe causes the tractor to work and supplies ample power to turn the engine.

You can read more on “Driving a Locomotive”,

“Halls of the Giants” and