Part 34 of Railway Wonders of the World was published on Friday 20th September 1935.

This issue contained a black and white art plate illustrating the Baltschieder Viaduct on the Lotschberg main line. The plate was attached to page 1069, or the fifth page of this number.

This week’s cover shows a view from the tender of a goods engine with one of the Great Western expresses speeding along the line between Reading and Didcot. The express locomotive is of the “Saint” Class. The leading dimensions are: cylinders (two) 18½ in by 30 in; total heating surface, 2,104 sq ft; grate area 27.07 sq ft; diameter of coupled wheels, 6 ft 8½ in; working pressure, 225 lb; tractive effort, 24,395 lb; and weight of the engine, in working order, without tender, 72 tons.”  The “Saint” is No. 2934 “Butleigh Court”.

This cover was reproduced as the colour plate with part 42. 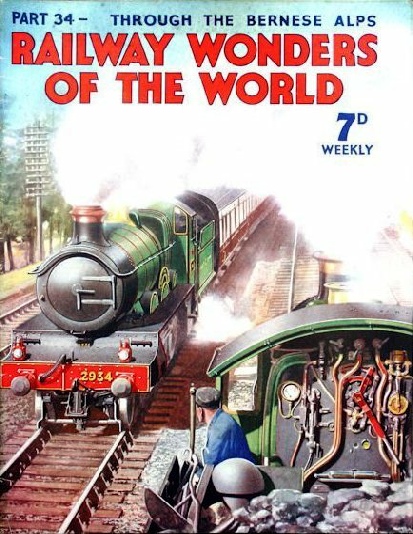 THE BALTSCHIEDER VIADUCT on the Lotschberg main line, illustrates the heavy cost and difficulty entailed in descending the steep mountain-side of the Rhone Valley from Hothenn to Brig; much bridging and tunnelling were necessary to make this descent. The Baltscheider Viaduct carries the rails 173 ft above a torrent, and the lattice girder span is 164 ft long.

Locomotive valve gears are a vital part of the railway engine’s mechanism. In part 26 there appeared a chapter describing the Stephenson, Allan, and Gooch link motions. This chapter describes the Joy and the Walschaerts valve gears. The latter is one of the most widely used locomotive gears of modern times. The first British engine to have this gear fitted was an 0-4-4 tanks, exhibited at the Paris Exhibition of 1878. Both gears are illustrated below. This is the thirteenth article in the series on Design and Invention.

RICHLY ORNAMENTED. The Pope’s private railway coach, which was specially appointed for His Holiness. In the days of the Papal States the Pope gave audiences at wayside stations.

A photograph of the Pope’s private station in the Vatican appeared in the article Stations and Their Story in part 24.

The railway in Palestine was a vital strategic system in the 1914-1918 War. The name of the late T. E. Lawrence - Lawrence of Arabia - is inevitably associated with the railways of Palestine. While the British troops were building aline from Kantara, on the Suez Canal, to Rafa, through the Sinai Desert, to the east - in Transjordan - Lawrence and his Arab forces were destroying sections of the Turkish Hedjaz railway, which ran between Damascus and Medina. Before 1914 the railway system in Palestine comprised the Jaffa-Jerusalem metre-gauge line, operated by a French company, and the Hedjaz railway. To-day the control of the railways is shared by the Palestine Government, which operates the standard lines in Palestine, the British Government, which operates the Kantara-Rafa sections, and the Wakf (the Hedjaz railway). The Palestine railways, apart from their fascinating story, contain on their lines one of the strangest railway phenomena, near Samakh, by the historic Sea of Galilee, the line descends to 700 ft below sea-level, and then a few miles farther on rise to 3,000ft above the sea at Deraa.

The  “singles” are an interesting but now defunct class of locomotive. The celebrated “Rocket”, which gained the prize at the Rainhill Trials, had single driving wheels. But perhaps the most famous of all the “single” locomotives ever built was the Great Western “Lord of the Isles”. This chapter will mention all these veterans, which, collectively, have contributed in many ways to the evolution of the locomotive. The article is concluded in part 35.

AN IMPORTANT JUNCTION. The station of Lydda where lines from Jerusalem, Jaffa, Haifa and Kantara meet. Platforms 3 and 4, seen above, accommodate trains for Kantara and Jaffa respectively. It is said that St George, the patron saint of England, was buried at Lydda.

A LONG-DISTANCE EXPRESS train leaving Haifa Station for El Kantara. The trains cover the distance of 256 miles between Kantara East and Haifa in ten hours. The expresses include sleeping and restaurant cars.

AT HAIFA HARBOUR, which was opened in October 1933. The Hedjaz Railway gives Haifa access to Transjordan and Syria. There is an entrance 600 ft. Wide and a space of 300 acres of sheltered water enclosed within the main and lee breakwaters for ships. The photograph shows a a tourist train at the port.

Through the Bernese Alps

A Beyer-Garratt Locomotive on the Leopoldina Railway

A "BEYER-GARRATT" LOCOMOTIVE built for the Leopoldina Railway. Two of these engines were designed for hauling heavy night passenger trains between Campos and Victoria, a distance of 200 miles. The cylinders measure 15½ in by 22 in, the diameter of the coupled wheels is 4 ft 2 in, the boiler pressure 185 lb per sq in, and the total heating surface

Through the Bernese Alps

This chapter includes a full description of the famous Lotschberg Railway, together with details of the picturesque fifty-three miles journey from Thun to Brig. An account is also given of the Lotschberg Tunnel, 9 miles 132 yards in length. This great undertaking is one of the finest memorials to railway endeavour. The work cost the lives of many men. The tunnel and the whole length of the Lotschberg main line were opened to traffic in mid-July 1913. This article was written by Cecil J. Allen. You can read more on the construction of the Lotschberg Tunnel in Frederick Talbot’s Railway Wonders of the World (1913). 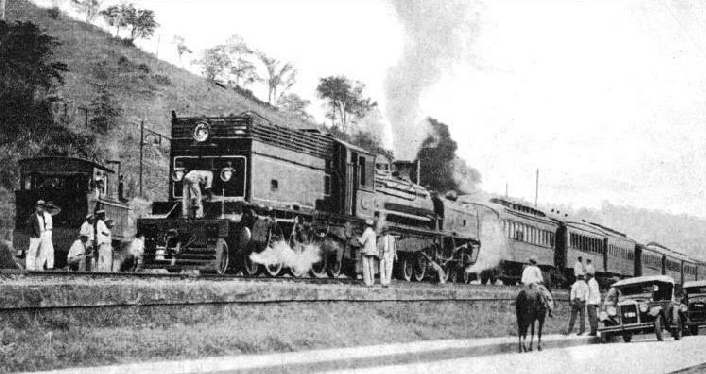 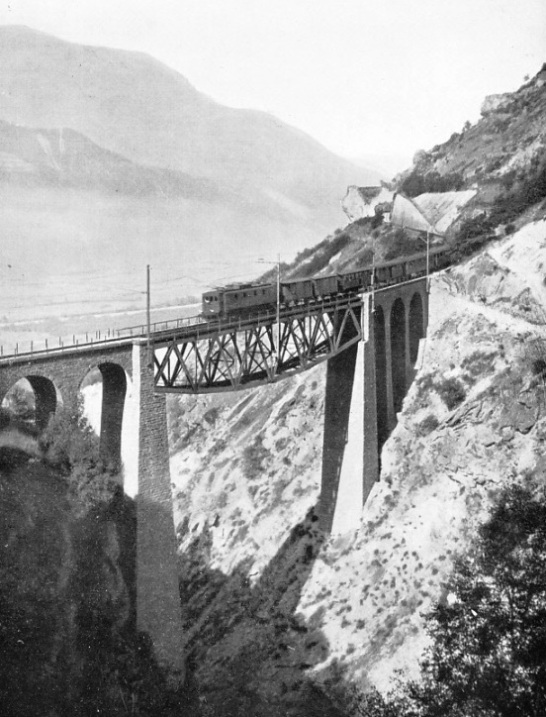 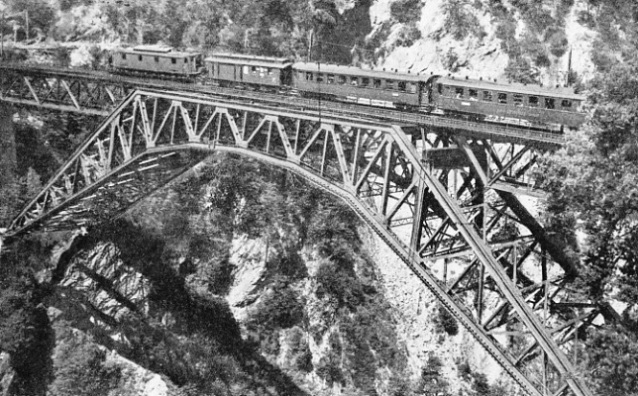 THIS MAGNIFICENT STEEL ARCH carries the Lotschberg Railway across the Bietschtal Gorge line at a height of 255 ft above the valley floor. The arch has a span of 311 ft and the 432 ft length of the bridge is flanked by tunnels on either side. Over the bridge the track has a 990 ft radius. One of the powerful Secheron 1-C-C-1 locomotives is seen at the head of the express. 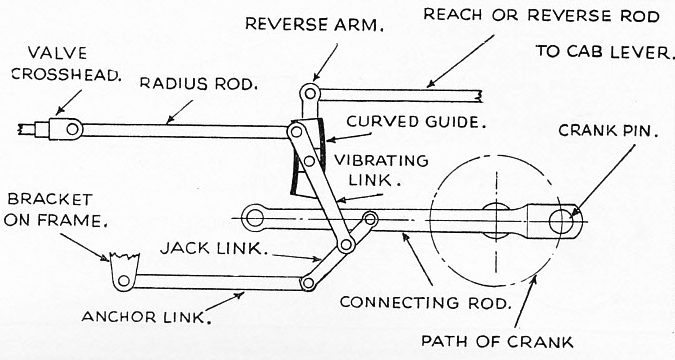 JOY’S VALVE GEAR, invented by the late David Joy in 1879, dispenses with eccentrics, the valve being operated by a die-block moving in a curved guide. The die-block is connected at its upper end to the valve spindle by a radius-rod and by a system of links to the connecting rod. The central pivot of the vibrating link is attached to the die-block.

LOCOMOTIVES with piston-valve cylinders can be fitted with Walschaerts gear, as represented by this fine working model in the Science Museum, South Kensington. The gear is set for backward running, and the live-steam space between the piston valve bobbins is seen open to the right-hand or front end of the cylinder. Steam has already been cut off from the back end of the cylinder, and is exhausting.

Special trains have a fascination of their own. Nowadays, however, because of telephones, motor transport, and the great improvement in the ordinary train services, they are less popular. But a few years ago, special trains were frequently chartered by business men to whom time represented money. During the American Civil War the Southern Confederate States, in an attempt to obtain recognition of their independence, arranged to send two of their representatives to Europe. These representatives, while on board the British mail steamer Trent, were seized by a warship of the U.S. Federal Government. The British Government sent a note, and the Federal reply was anxiously awaited. On January 7, 1862, an express carrying this reply ran from Holyhead, Anglesey, to Stafford, 130½ miles, at an average speed of 54.3 mph. From Stafford it ran the 133½ miles to London (Euston) at the still higher average speed of 57.4 mph. This chapter deals with this unfamiliar aspect of railway operation.

A photograph of the Special Train for the Governor of Nyasaland appeared in the article Pioneering in Nyasaland in part 32. 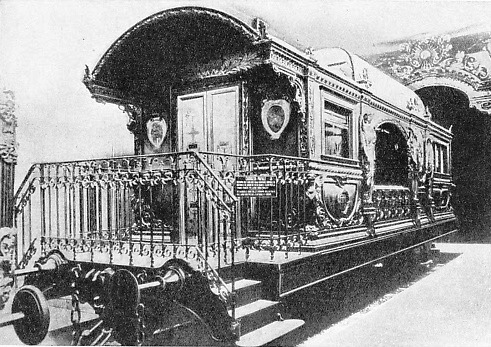 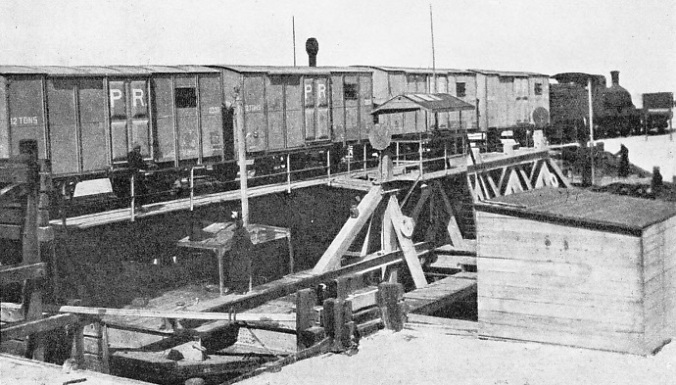 Across the Suez Canal 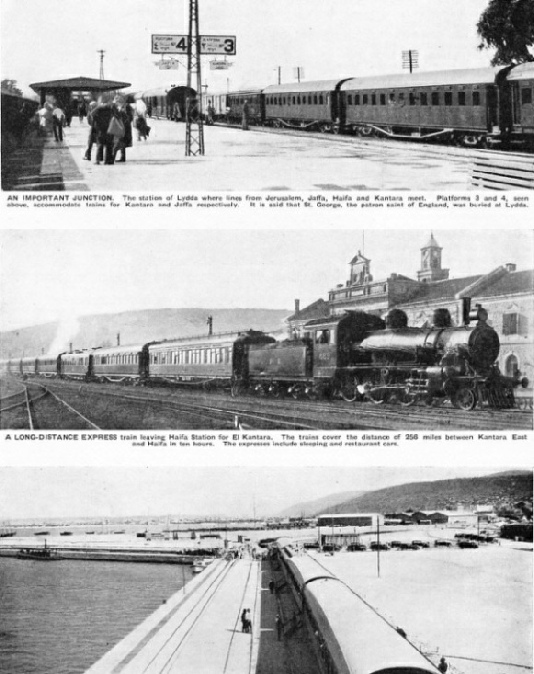 A SINGLE DRIVER EXPRESS ENGINE designed by J. Holden for the Great Eastern Railway. The driving wheels were 7 ft diameter and the cylinders 18 in by 24 in. The earlier engines of this class had a boiler pressure of 140 lb; in later engines the pressure was 160 lb. The total heating surface was 1,230 sq ft, and the grate area 17.9 sq ft. The weight, without tender, was 40 tons 3 cwt in working order.