Part 37 of Railway Wonders of the World was published on Friday 11th October 1935.

This issue contained a black and white art plate illustrating the Lapland Express. It formed part of the article on Sweden’s Rail System. The plate was attached to page 1165, or the fifth page of this number.

"The cover this week shows a 4-6-2 LMS express locomotive, “The Princess Royal”. This engine has four cylinders measuring 16¼ in diameter by 28 in stroke. The coupled wheels have a

This locomotive previously appeared on the front cover of part 1 and as the art plate in part 12.

You can read more on the LMS Pacifics in Wonders of World Engineering. 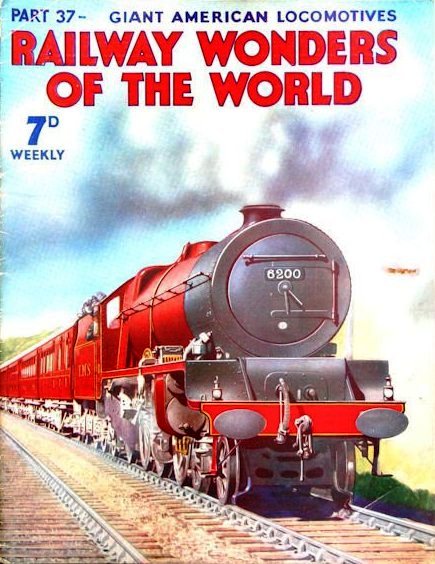 On the Route of the Lapland Express

ON THE ROUTE OF THE LAPLAND EXPRESS. This is the name familiarly applied to an express train of the Swedish State Railways which travels northwards from Stockholm with a through coach for the Riksgransen railway, in the extreme north of Sweden, well within the Arctic Circle. The Riksgransen Railway was constructed under considerable difficulties, but the enemy of ice and snow has been faced and defeated. In this photograph a station-master in the far north is signalling to the driver on a special platform erected for use at times when the snow is deep.

One of the World’s Fastest Lines

The Northern Railway of France claims some of the fastest steam-operated runs in the world. Here is the celebrated “Golden Arrow” express at Calais, beginning its 184-mile journey to Paris, which is covered in 193 minutes. In the reverse direction the time is 187 minutes. The “Nord Express” begins its journey from Paris over Nord metals, and runs non-stop over the 226.7 miles to Liege, in Belgium, in 3 hours 56 minutes.

On the Route of the Lapland Express (art plate)

A SLEEPING CAR OF 1884. Sleeping cars of this period afforded accommodation for twenty people. Were gas-lit, and weighed about 27 tons. The first continental sleeping car was constructed in 1872. It was a four-wheeled vehicle, and was lit by colza oil. It weighed only 13½ tons.

The rail conquest of the world has included some outstanding achievements. One of these is the celebrated Riksgransen line which runs across the Arctic Circle to the Norwegian boundary. There are 280 miles of electrification on this route, from Lulea, in Sweden, to Narvik, the Norwegian terminus. This chapter includes a description of  this line, which runs through the land of the Midnight Sun. The main trunk lines throughout Sweden are operated by the Government, but branch and local lines are chiefly worked by private companies. Scandinavia has an efficient and modern system. The standard-gauge lines owned by the State amount to, approximately, 4,250 miles, the private lines to 4,000, while there are also some 2,000 miles of privately-operated narrow gauge lines.

A Modern Coach Built for the International Sleeping Car Company

AN ALL-METAL MODERN COACH built for the company. Standard measurements have been adopted for the construction of the cars. The overall length is 76 ft 11 in; the distance between bogie centres is 52 ft 6 in, and the distance between wheel centres 8 ft 2½ in. The interior arrangements vary according to the service in which the cars are employed. 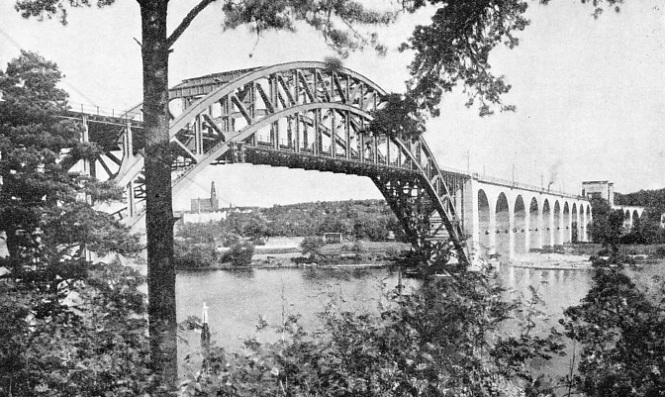 STEEL AND REINFORCED CONCRETE are widely used to-day for bridge construction on the Swedish State Railways. This illustrations shows the Arsta Bridge which carries the railway over a river in the Stockholm suburbs. 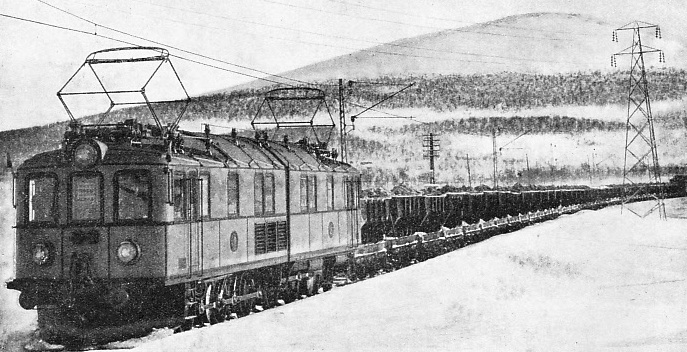 AN IRON ORE TRAIN on the Narvik-Lulea route. This section of the Arctic Circle line is electrically operated for 280 miles, and is one of the world’s most northerly railways. From Riksgransen on the border the line is controlled by the Norwegian State Railways.

You can read more on this railway in Wonders of World Engineering. 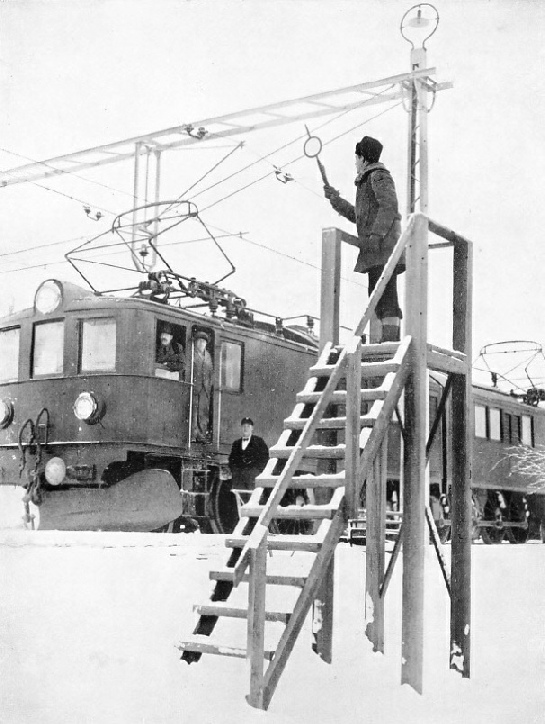 Goods Engine in Service on the Mauritius Government Railways

EIGHT-COUPLED GOODS ENGINE in service on the Mauritius Government Railways. The island has 111 miles of standard-gauge track open, served by some fifty locomotives, 187 carriages,747 wagons and four rail-motor trolleys. There are also 14-1/2 miles of 2 ft. 6 in. gauge track open, with three locomotives, one carriage and 162 wagons.

The 4-4-0 type locomotive has proved to be one of the most popular designs introduced on British railways. This chapter is devoted to the many famous 4-4-0 engines past and present, mentioning their various characteristics and performances. 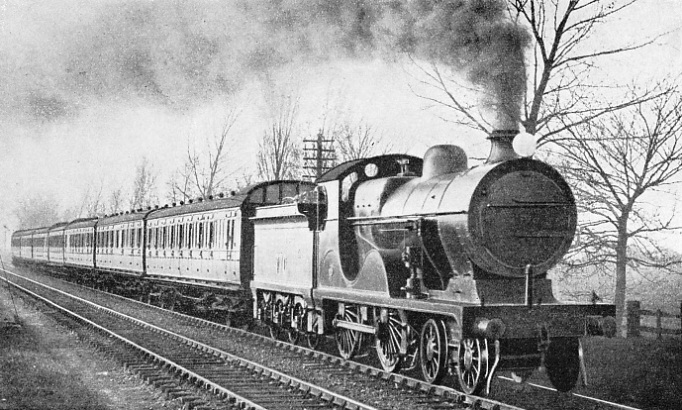 Between London and Sevenoaks

A down express near Chelsfield, Kent, on the Southern Railway’s Eastern Section. The train is hauled by a 4-4-0 locomotive, built in 1914 and formerly owned by the South Eastern and Chatham Railway. The engine has cylinders 20½ in by 26 in, driving wheels of 6 ft 8 in diameter, a total heating surface , including superheater, of 1,731 sq ft, and a boiler pressure of 160 lb per sq in. The grate area is 22.5 sq ft. The total weight of the engine, without tender, is 57 tons 9 cwt.

“CORONATION”. This famous engine of 1910 - one of the “George the Fifth” class - was the five thousandth locomotive turned out at the Crewe works of the London and North Western Railway. Its cylinders measured 20½ by 26 in. Locomotives of this type generally resembled the “Precursors”, except that they were superheated and had larger cylinders and extended smokeboxes. The total heating surface, including superheater, was 1849.6 sq ft.

A European system that ranks among the world’s foremost railways is the Chemin de Fer du Nord (the Northern Railway of France), which has a mileage of 2,500, including over 100 miles of rail in Belgium. The railway taps the wealthy industrial region in the north and north-east of France, including the numerous mines in that region. It carries a large percentage of the total volume of french freight traffic. The railway also handles some important cross-channel traffic from England, and has termini at Boulogne, Dunkirk and Calais.

A NORD EXPRESS LOCOMOTIVE. This “Super-Pacific” 4-6-2 engine weighs 96 tons without the tender, and is a four-cylinder compound. Engines of this type are used for hauling some of the heaviest expresses on the lines of the Northern Railway of France; trains of over 600 tons are hauled at speeds of well over sixty miles an hour.

American locomotives frequently haul passenger trains that weigh more than a thousand tons behind the tender. Goods trains in America are sometimes nearly a mile long. These heavy trains have to be worked through mountainous territory. Such facts will explain why American has some of the world's most powerful locomotives. In this chapter, Cecil J. Allen describes these giant American locomotives. Among the many interesting locomotive types with which this article deals will be the 2-8-0+0-8-4’s built in 1930 by the Baldwin Locomotive Works for the Northern Pacific Railroad. The engine and tender of these remarkable locomotives weigh 501½ tons and measure together 125 feet in length. Twelve of these giants are in operation, and they were specially constructed to haul 4,000-tons trains over a line that has long adverse gradients of 1 in 90. The tenders hold 21,000 gallons of water and twenty-seven tons of coal. This article is concluded in part 38. 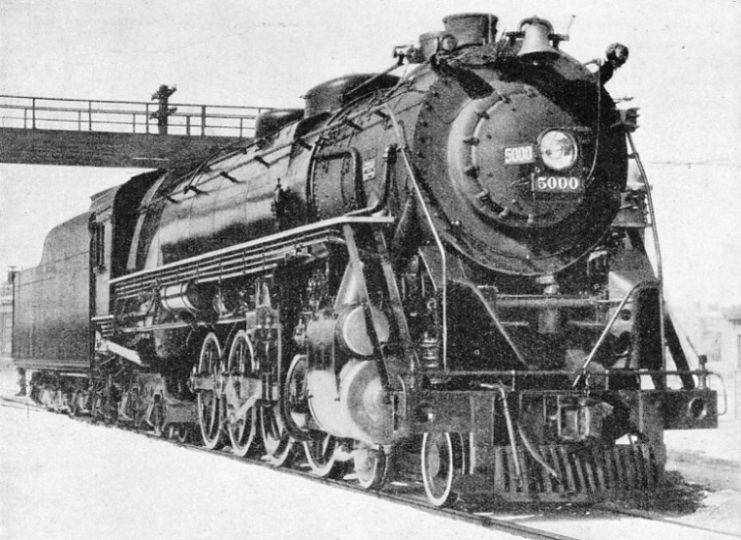 A HEAD-ON VIEW of freight locomotive No. 5000 of the Rock Island Lines shows features of equipment which are standard in North America, such as the cow-catcher, electric headlight, and “marker” lights on either side of the chimney, with the bell between. The engine is of the 4-8-4 type, with 5 ft 9 in driving wheels, and a tractive effort of 66,620 lb, increased with booster to 79,700 lb. The engine weighs 194 tons, or, with tender, 327 tons. The tender capacity is 15,000 gallons of water and 20 tons of coal.